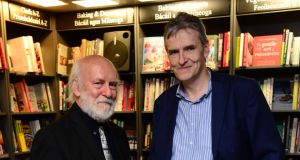 “Huge sacrifices” were made by John Redmond, which should be acknowledged even as the sacrifices of the leaders of the 1916 are acknowledged, author Chris Dooley has said.

Speaking at the launch of his book John Redmond: A Life Undone, Mr Dooley, The Irish Times foreign editor, said Mr Redmond had almost succeeded in getting Home Rule for Ireland only to be thwarted by the outbreak of the first World War.

The Irish Parliamentary Party leader had gained Royal ascent for the Home Rule bill in September 1914, but it was suspended for the duration of the war. Eventually, it was supplanted by a desire for independence and the rise of Sinn Féin which occurred after the Easter Rising in 1916.

“In all the conversations we are having over the next year, his contribution needs to be acknowledged and that can be done without taking a position for or against anybody in the whole debate,” Mr Dooley said at the launch in Hodges Figgis in Dublin.

John Redmond: A Life Undone was launched by the former press ombudsman Prof John Horgan, who said there were several historical parallels between Redmond’s time and today.