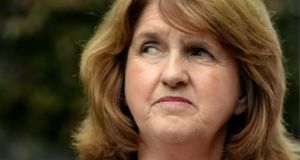 Tánaiste Joan Burton said the time lines on the roll out of water metering had been ‘far more ambitious than has actually been realised’.

The net charge for water will be “modest” and hopefully will be known by the end of this month, Tánaiste Joan Burton has said.

Speaking at the opening of an exhibition at Farmleigh in Dublin this afternoon, Ms Burton said the Government had a number of meetings and detailed discussions, but had not yet settled “on the exact amounts”.

“I expect and hope they will conclude later this month and then we will be in a position to make an announcement for people,” she said.

She said she and the Government had been listening very carefully to what people have been saying and the concerns they have been expressing.

“It will be a capped charge for single occupancy households and a separate charge following the structure that the Commissioner for Energy Regulation has set out,” the Tánaiste said.

As already announced in the Budget, she said there will be a water support payment of €100 in addition to a tax credit of the same amount.

“So the net charge to people I’m very confident will be modest and will meet the needs to have a very significant funding programme,” she said.

Ms Burton said the time lines on the roll out of water metering had been “far more ambitious than has actually been realised” and because of that the Government was discussing how to have a “modest affordable charge”. This would provide “an element of the funding and the capacity to borrow money off-balance sheet to provide for the massive investment in water infrastructure that the country has to make over the next 10 years”.

“If we don’t have a mechanism from which to secure investment off the balance sheet we will actually have to provide for this massive investment out of ordinary day to day taxation,” she said.

“It is much better if we have a company, a state company like the ESB like An Bord Gáis that can borrow internationally and fund what will be a hugely ambitious programme to provide clean water for people.”

She described the introduction of Irish Water as the equivalent of the establishment of the ESB not long after the foundation of the State.

“It is a very big undertaking for the State,” she said.