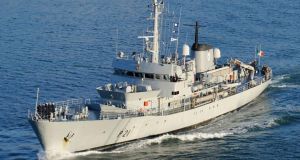 The former Naval Service vessel the LE Emer, which was stood down last month after 35 years, has been sold at auction in Cork today for €320,000 to a Nigerian businessman based in London.

Cyprian Imobhio, chief executive and managing director of Uniglobe Group, said he had got the LE Emer, stripped of its armaments, for a good price, but he was reluctant to say it was a bargain. “It was a good price - but I would have preferred to get her for €200,000,” he said with a smile.

Speaking following the auction at the Carrigaline Court Hotel in Co Cork where he saw off two rival bidders after bidding rose quickly from an opening gambit of €50,000, Mr Imobhio said he was impressed by the LE Emer when he first saw her at Naval Service HQ at nearby Haulbowline.

“It’s a beautiful boat. Navies are very meticulous organisations and they always keep their equipment well maintained - it was quite well looked after for its age, but it’s still 35 years old, so there are a few things that need to be done - plus there are a few issues of classification.”

Mr Imobhio said he plans to bring the LE Emer to London after upgrading work which he hopes to get done locally in Cork. Then he will decide what to do with the Irish ship, which was involved in the seizure of the IRA gun-running ship, the Marita Ann, in 1984.

“It’s always a pleasure to get a new boat, and this is an exceptionally big boat - it’s not every day you come across a boat like this. We are going to make some changes and decide from there what we are going to do with it - either use it privately or use it commercially.

“Commercially, I could probably use it for protection in the Niger Delta off Nigeria to provide security for oil companies. We are doing that kind of work today in that area, but not with equipment this big,” said Mr Imobhio, who already owns seven other ships.

Auctioneer Dominic Daly said he was slightly disappointed with the price that the LE Emer made, as one of five interested parties did not attend the auction and only three of the remaining four parties engaged in the bidding, but he wished the new owner well.

“I am a little bit disappointed - I had a slightly higher price in my mind in view of the level of interest, but it’s all part of a good news story. She’s being replaced by a new much larger ship; this was an older ship and time doesn’t wait for anyone,” he said.

Among those at yesterday’s auction were two of the LE Emer’s former captains - ex-Lt Cmdr Eamon Doyle, who collected the ship from Verolme Cork Dockyard in 1978, and ex-Lt Cmdr Aidan Kehoe, who skippered her on a supply trip to Lebanon in 1995.

“I stood in for the first captain Jack Jordan when we collected her from the dockyard,” said Mr Doyle, “so it was great to be there at her first day of service and here today to see the end of her in Irish service - it would be nice though to see one of these ships kept as a museum ship.

“Probably the one that should have been kept was the LE Deirdre, since it was the very first naval vessel built in Cork, but she’s gone too.

“I think one of the others built there should be kept as a museum ship as they are an important part of our maritime heritage.”