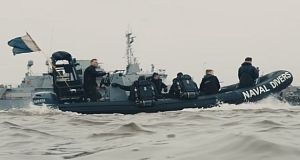 Training for the diving section is among the most strenuous in the Defence Forces.

The Naval Service’s elite diving unit is operating at less than a quarter of its intended capacity as a result of the Defence Force’s retention crisis.

Naval Service Diving Section is the only dive team in Ireland capable of carrying out deep sea operations. It has a wide variety of roles but its most prominent function is carrying out search and recovery operations for missing persons.

It carries out an average of 15 missing person searches every year, some of which last for up to two weeks at a time.

The diving section has an establishment strength of 27 divers but is operating with just six as a result of highly trained personnel leaving for the private sector. Moreover, the problem is compounded by a lack of replacements coming through.

The diving section has not been at full strength since before the reorganisation of the Defence Forces in 2012 which was marked by significant cuts to resources and a new manpower limit of 9,500.

The section is supposed to be on call 24 hours a day, 365 days a year. But this is not possible with six staff, according to military sources, especially as more complex operations require double that number for diving and related support operations on the surface.

For example, the search and recovery mission for the five victims of the Tit Bonhomme sinking off the coast of Cork in 2012 required far more than six personnel.

“It would be like playing a hurling match with six men. These are massively complex operations with almost no margin for error,” said a military source.

In the event of a maritime disaster on the scale of the Tit Bonhomme or the 1985 Air India disaster, the Naval Service has an option of calling in trained divers from other sections. But this would place them at increased risk because they lack the intensive training supplied to diving section personnel, say sources.

Most divers leaving the section are taking up jobs in the private maritime sector. This includes with oil and gas exploration companies and with the merchant navy where they are in high demand due to their expertise.

A significant number have also been redeployed to fill gaps elsewhere in the service.

Trained divers, like all Defence Forces personnel, must pay €300 to “buy their way out” of the service. Training for the diving section is among the most strenuous in the Defence Forces. The 11-week course takes place in winter only to acclimatise divers to harsh conditions. About six out of every seven naval personnel who start the training fail to qualify.

What falls within its remit?

As well as search and recovery, the service is also responsible for defusing mines, including the many second World War-era mines located in Irish waters.

Other functions include harbour protection and underwater inspections of ships suspected of drug smuggling. The service also participated in Operation Sophia in the Mediterranean where it undertook search and rescue and search and recovery operations.

The diving section is one of several Defence Forces units hollowed out by the recruitment crisis. It was announced last month that two of the Naval Service’s nine ships are being tied up due to manpower shortages.

It has also emerged the Defence Forces’ internal cybersecurity team was wound up earlier this year with the departure of its last remaining staff member.

Senator Gerald Craughwell said a private company is now being paid €44,000 a month to perform the same function.

“What does it say about our defence strategy that we now have a civilian company with eyes on military grade communications and intelligence?” he said.