Naomi Long looks certain to be next Alliance leader

East Belfast MLA due to be formally ratified on October 26th 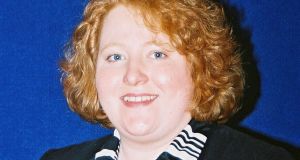 Naomi Long said, “If elected, I will not only be the first woman to lead the party, I will also be the first leader younger than Alliance itself.”

The East Belfast Assembly member Naomi Long seems certain to become the next leader of the Alliance party in two weeks time after she emerged as the only MLA seeking the post.

After David Ford stood down as leader last week, the only candidates eligible to replace him were the seven other Alliance members in the Northern Assembly including Ms Long. On Tuesday all six other Alliance MLAs including former minister of employment Stephen Farry, viewed initially as a possible challenger, signed her nomination papers.

Nominations close at 5pm today. Thereafter it will be for the Alliance ruling council of some 300 members to ratify Ms Long as Alliance leader in two weeks time. To be elected she must win 50 per cent of the vote plus one vote, and currently that seems guaranteed.

Ms Long (44), who is acting as interim leader, said if elected as leader, she wanted to use the opportunity to “refresh, renew and re-energise” the party, building on the work of Mr Ford.

“Since David made the decision to step down as leader after 15 very successful years at the helm, I have been heartened and encouraged by the support I have received from colleagues, the wider membership and many others across Northern Ireland to put my name forward as a leadership candidate,” she said. Ms Long, who won former DUP leader and First Minister Peter Robinson’s East Belfast Westminster seat in 2010, but lost the seat last year, said she would be “honoured” to be the eighth leader of Alliance which was formed in 1970.

Said Ms Long, “If elected, I will not only be the first woman to lead the party, but it will also mark a generational change, as I will also be the first leader younger than Alliance itself.

“As such, I am conscious that, while the core values of the Alliance Party are still as relevant as ever, we need to be willing to renew our message, refresh our vision and re-energise not just our current members but a public growing increasingly weary of what often passes for politics here.”

1 With Lincoln looking on, the crowd dropped to their knees as 7pm approached
2 Luke ‘Ming’ Flanagan bares his bottom half to European Parliament
3 Coronavirus: 25% of new cases arising in the community with no known link to other cases
4 Easing restrictions: What exactly will happen next Monday?
5 Sweden should have done more to combat coronavirus, health chief says
Real news has value SUBSCRIBE