Nóra Quoirin’s grandfather: ‘Dark areas need to be cleared up’

Growing suspicions that teenager may have been abducted and murdered 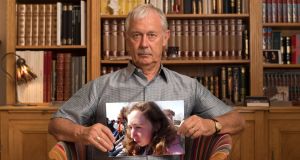 Sylvain Quoirin holding a photograph of his granddaughter Nóra, who was found dead in Malaysia on Tuesday after a 10-day search. Photograph: Titouan Rimbault

The French grandfather of Nóra Quoirin has said he believes “someone put” the teenager’s body in the place where she was found in Malaysia on Tuesday following a 10-day search operation.

The ravine where the 15-year-old’s unclothed body was found, some 2.5km from the rainforest resort where she was staying with her family, had previously been searched a number of times.

“She wasn’t there yet [during previous searches]. Someone put her there, to get rid of her,” Mr Quoirin said.

The cause of Nóra’s death is yet to be announced, and a postmortem, which began on Wednesday, is to continue on Thursday.

Mr Quoirin, the mayor of a small town in Burgundy, said there are “dark areas that need to be cleared up for the family to be able to grieve in peace”.

He discounted theories that Nóra could have wandered outside on her own or been enticed out by a stranger.

Nóra suffered from holoprosencephaly, a congenital defect that limited her development. She clung to her parents and siblings and was easily frightened, Mr Quoirin said.

“Can you imagine her walking 2.5km, naked and barefoot, over rocks, in the middle of the night?” Mr Quoirin asked. “For me, that’s absurd.”

“I pray for strength for [Nóra’s family] to go through this difficult period,” she posted on Twitter. “We believe the police will do their utmost to unravel this tragic death.”

There are growing suspicions that Nóra may have been abducted and murdered. The Paris prosecutor’s office has opened a preliminary investigation for kidnapping and sequestration, and her family have established their status as civil plaintiffs in a possible future trial by filing a lawsuit against unknown persons, as allowed by French law.

A reward of 50,000 Malaysian ringgit (about €10,700) had been offered on the day before her body was found. Nóra, her parents and two younger siblings arrived at the Dusun rainforest resort on August 3rd. She disappeared during their first night there.

Since Nóra’s disappearance, her family have said they believed she was abducted. Malaysian police have not ruled anything out, but so far say there is no evidence of foul play. They found unidentified fingerprints on an open window in the downstairs living room of the family’s bungalow, but have made no further announcement.

“Nora is at the heart of our family. She is the truest, most precious girl and we love her infinitely,” her family said yesterday in a statement released through the Lucie Blackman Trust. “The cruelty of her being taken away is unbearable. Our hearts are broken. We will always love our Nóra.”