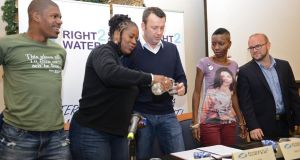 Opposition to water charges took on fresh cultural and international dimensions at the weekend as US campaigners and trad musicians joined the fray.

In advance of Wednesday’s proposed mass rally against water charges in Dublin, the Right 2Water Campaign introduced fellow campaigners from Detroit in the USA.

Also calling for a mass mobilisation against the charges are a group of west of Ireland musicians whose video has caught the attention of tens of thousands of people online.

The musicians – including Galway comic actor Aindrias de Staic, his brother Eamon de Staic, Donal Gibbons and Liam Donoghue – put up the video of their ballad, No Privatisation, Irish Water, Irish Nation, on YouTube in support of the Irish Water protesters.

The catchy tune targets the Government with lyrics such as “Enda Kenny - not a penny - we won’t pay at all because the corruption of your policies is worse than Fianna Fáil”.

The video, recorded live in the kitchen of traditional music venue Campbell’s Tavern, near Headford in Co Galway, features many well known figures from the trad-music scene.

Aindrias de Staic said many people played on different nights including Noelie McDonald, Dave Clancy, Fabian Joyce, Joe Fury, William Merrigan and Liam Ivory and others, who operate under the name of the Rolling Tav Revue.

“It relates to broad discontent” said Mr de Staic while fellow musician Donal Gibbons said “the message is that we want to see a referendum on privatisation” of Irish water.

The video, edited by Philip Noone ends with a reminder of Wednesday’s march to Dáil Éireann. On Sunday the video was attracting several hundred hits per hour as news of its appearance on YouTube spread.

In Dublin, members of the Detroit Water Brigade held a press conference to show solidarity and share their experience of opposition to charges.

Director of advocacy with the campaign group Demeeko Williams quoted the United Nations to the effect that water should be “accessible and affordable”. He said they never asked for free water.

“We ask for fairness, we ask for accountability”.

Mr Williams said what was required from the protesters was “a spiritual strategy”, one that would allow people everywhere to “learn together and stay together”.

Fellow campaigner Justin Wetes outlined the struggle against water charges in Detroit saying that while privatisation was banned, bonds had been sold to the private sector to the extent that 46 percent of the utility’s revenue now went to pay back interest on those bonds.

Brendan Ogle of Right2Water said it accepted that clean water was not produced for free. But he said it was already paid for through taxes and people would not pay for it twice.

Anti-water charge protests continues across the country with organisers calling for a nationwide boycott of the charges and for support for the rally against charges in Dublin.

Videos have also been posted on Facebook showing the kinds of arguments which have been successful in preventing crews acting for Irish Water from entering housing estates to install meters.

In one such incident on Facebook protesters in Co Donegal are shown asking crews acting for Irish Water for copies of their permit to dig, along with requests for copies of the crew’s proposed traffic management plan.

In this case the protesters also maintained that as the housing estate had not been taken in charge by the county council, it was private property and the crew was asked to leave.