In a year of 1916 commemorations, there is no State funding for Mayo museum devoted to influential Land League founder who split with Parnell and is said to have inspired Gandhi 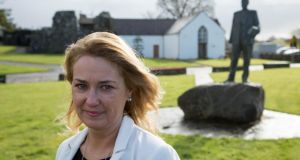 Yvonne Corcoran-Loftus, curator of the Michael Davitt Museum, said politicians of all political stripes had been approached about funding, with no success. Photograph: Keith Heneghan/Phocus

When the electricity bill comes in for the State’s only museum dedicated to international humanitarian and social reformer Michael Davitt, the voluntary board has to pass around a hat.

The small museum, located in an old penal church in Straide near Foxford, Co Mayo, is so cash-strapped that it relies on visitor donations to meet heating and insurance costs.

Davitt, the founder of the Land League, is one of Mayo’s most famous sons, yet museum supervisor Yvonne Corcoran- Loftus can’t understand why, when the State is making such an effort to commemorate the 1916 Rising, there is no effort to remember his legacy.

John Comer, president of the Irish Creamery Milk Suppliers Association, has called for long- overdue State recognition of the man who did the “most to rescue Ireland’s tenant farmers from conditions of semi-serfdom”.

The museum, originally housed in a community centre, charts how the Davitt family was evicted from their small holding in Straide when Michael was just four, and how they caught the boat to Liverpool and walked all the way to Haslindgen in Lancashire.

Young Michael was forced to seek work in local cotton mills at the age of nine, and lost his arm in a factory accident when he was 11. He joined the Irish Republican Brotherhood, became involved in arms traffic to Ireland and, at the age of 24, was arrested and imprisoned for 15 years.

This time in prison convinced Davitt that violence was counter-productive, as armed movements were inevitably infiltrated by the State. He renounced his Fenian oath and entered constitutional politics after his release.

Davitt became a leading figure in the Land League movement and worked with Charles Stewart Parnell, until the two disagreed over Davitt’s support for land nationalisation.

Museum chair Nancy Smyth said that it had received some State funding in the past. It received €250,000 in European funding in 1996, which paid for restoration work in the church and an archaeological dig in the grounds where Davitt is buried.

However, it has depended largely on voluntary fundraising since, and on a community employment scheme for part- time staff.

Ms Corcoran-Loftus said that permanency and continuity was required to ensure that it qualified for approval under the Museum Standards Programme administered by the Heritage Council.

Ms Corcoran-Loftus said politicians in all parties had been approached in relation to the funding issue, with no success.

The Office of Public Works said decisions on taking a location into State care were a matter for the Department of Arts, Heritage and Gaeltacht.