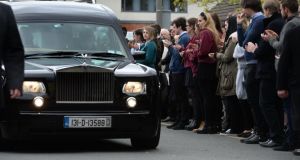 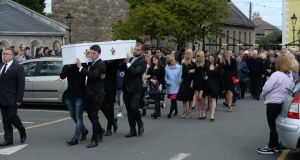 Mourners at the funeral of Ana Hick in Dalkey. Photograph: Dara Mac Donaill / The Irish Times 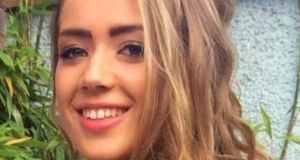 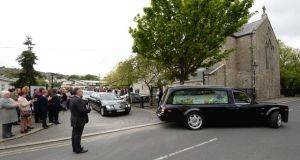 The funeral of Ana Hick, at the Church of the Assumption, Dalkey, Co Dublin. Photograph: Dara Mac Dónaill 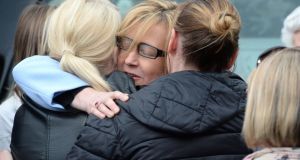 Elga Hick, (centre) is comforted at the funeral of her daughter Ana Hick, at the Church of the Assumption, Dalkey, Co Dublin. Photograph: Dara Mac Dónaill 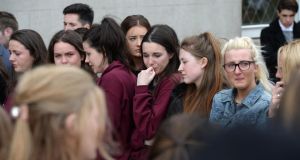 Students at the funeral of Ana Hick, at the Church of the Assumption, Dalkey, Co Dublin. Photograph: Dara Mac Dónaill

Ana Hick was a born performer who lit up everyone’s life with love, laughter and fun, mourners heard at her funeral Mass at the Church of the Assumption in Dalkey.

Ana collapsed on Dublin’s Middle Abbey Street in the early hours of Saturday and died in the Mater hospital on Sunday evening. She would have turned 19 on Tuesday.

Chief celebrant Fr Patrick Devitt invited the congregation to “weep for her very sudden death but you are also invited to laugh with her as she goes home to God in heaven”. He was assisted by Fr John Killeen, a close friend of Ana’s grandaunt.

The church was packed long before the ceremony began and the walls were lined with young people, some carrying pink roses for her coffin. The mourners were led by her mother Elga and father Tim McMurray. Ms Hick told the congregation how Ana had “smashed into Tim’s and my life like a comet” when she was born. “She lit up everyone’s lives...From the time she was a baby she commanded respect and attention.”

She and her only child “were like salt and pepper” they got on so well together. They made videos of themselves singing in the car to songs from Disney and Enimen “and half of those videos you’re not going to see because I’ll end up probably in trouble for them”.

She said her daughter had ticked every box in life. “She’s done everything she wanted to do... She packed so much love and life and laughter into those 18 years.” Ana was nearing the end of a six-month course on acting for camera at the Irish Film Academy in Temple Bar and everything was in place for her to have “a really bright future”.

She thanked Ana’s boyfriend Charles “ for loving her and making her final days so happy” and asked people to support him in the coming months. Ms Hick also thanked the medical staff who had cared for Ana after she had become unwell. The teenager had been out with friends at the Twisted Pepper nightclub on Friday night and gardaí believe she may have taken an ecstasy-type tablet before she collapsed.

Will Flanagan, chaplain at her former school Loreto Abbey Dalkey was asked to speak on behalf of Ana’s close friends Saoirse and Eve. “I met with Saoirse and Eve earlier today and we all decided that there’s a quiet corner in heaven that’s suddenly become a lot more lively in the last few days with the advent of Ana’s arrival,” he said.

Ana was “the epitome of life and laughter and fun”. Like a comet, she was “fast, bright but gone all too quickly...she filled a whole room with her presence. She wanted people to know who she was”.

He recalled her involvement in school pranks, such as the sneaky trips to the staff-room to steal biscuits, the borrowing of the caretakers’s walkie-talkie, and the throwing of pot plants from a third storey window. “Energy, fire and chaos. You always knew when Ana was around,” he said. “Ana was a born performer... She entertained and enthralled in equal measure.”

Students and teachers from the Irish Film Academy were among the mourners. They included founder of the school, and Fair City actor, Rachel Sarah Murphy and many of her colleagues from the RTÉ soap.

The music and singing was provided by Loreto Abbey Dalkey, and her friend Grace Barry sang the Kinks song Days to warm applause. Friends wearing fleeces bearing Loreto Abbey’s logo formed a guard of honour as the coffin left the church for burial at Shanganagh Cemetery.