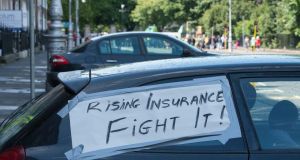 A group named Underground Ireland organised a protest against sharp increases in the cost of motor insurance, in Dublin today. However, the turnout was low. Photograph: Dave Meehan/The Irish Times

In recent months the cost of motor insurance has become a serious issue particularly affecting young people and small businesses.

Motor insurance has risen by 60 per cent in the last two years causing severe strain on already over-stretched household budgets.

In response to the rising prices, Kian Griffin (25) from Killorglin, Co Kerry set up a group called Ireland Underground as a forum for young people who have been priced out of the insurance market.

He called a monster rally for Merrion Square and said he expected 6,000 cars in attendance while 7,000 confirmed on Facebook that they would be going.

“On July 2nd, we will undertake the largest cruise this country has ever seen. Thousands of cars, thousands of voices all united against our oppressors!”

In anticipation of the multitudes, the gardaí closed off the south side of Merrion Square.

The crowds were due to assemble at 12pm outside the Dáil and proceed from Merrion Square at 2pm. At 1pm just six people were in attendance including Stephanie Hayes (28) whose insurance premium doubled to almost €4,000 last year. Looking at the empty street, she lamented: “No one gets off their arse in this country. That’s why nothing changes.”

Just before 2pm, a couple of Sinn Féin activists arrived with a makeshift stage, speakers and a few protesters with flags. By the time the rally started there was 70 people in attendance.

Undaunted, Mr Griffin, who celebrates his 25th birthday on Saturday, said the little trickle present would soon become a flood.

He called for the re-establishment of the Motor Insurance Advisory Board and a database of out of court settlements as it was important that there was transparency about the cost of claims, he said.

“We are the underdogs here, the motorists of Ireland. We have been beaten and knocked. Today is the start of something,” he said.

The response from the public was underwhelming, but there was a decent turnout of elected politicians. Independent TD Thomas Pringle said anybody who organised a protest about the banks in 2006 would have attracted few protesters.

Fianna Fáil TD John Lahart told the crowd that when he first organised a public meeting just five people turned up and yet he topped the poll in the last general election. “Stick with this. It’s a first step,” he said.

People before Profit Alliance TD Gino Kenny, who does not drive, said all movements by definition start small. “I wouldn’t get too downhearted about things,” he told Mr Griffin. “Like all TDs, we started off small. This issue affects everybody across the country”. The cost of insurance was part of the rip-off culture in Ireland, he added.

The keynote speaker was the consumer journalist Charlie Weston who has been campaigning on the issue of rising motor insurance for two years.

“It’s not a huge turnout, let’s be brutally honest,” he said, “but this could be the start of something.”

Mr Weston lambasted the insurance companies for their spin on the cost of claims. None of their excuses stacked up, he stated.

Insurance companies were too soft and were settling claims at great cost to avoid going to court, he said.

The excuses they had made for rising insurance costs did not stand up to scrutiny and they knew that changes were coming in the industry and made no provision for it, said Mr Weston.