More than half of travellers use cars for journeys under 2km

Bicycle trips made up just 1.6% of all journeys last year 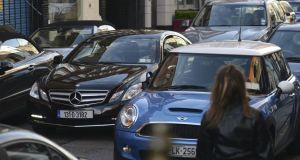 CSO figures show Irish people love their cars, which made up three quarters of journeys made between October and December. File photograph: Dave Meehan

One-in-five journeys made by Irish people last year were for distances of less than 2km yet over half of us still use the car for such journeys.

The Central Statistics Office’s National Travel Survey 2014 shows that Irish people love their cars, which made up three quarters of journeys made between October and December.

About a fifth of all journeys were of less than 2km, a distance, which online distance calculators indicate should take around 20 minutes to walk at a moderate pace.

However, just over half of those surveyed (51 per cent) took to their cars for such journeys (either as a driver or passenger) while 44 per cent of people opted to walk and 1.6 per cent said they cycled.

Indeed despite the resurgence in cycling over recent years bicycle trips made up less than 2 per cent of all journeys undertaken by Irish people.

However, it should be taken into account that the survey was carried out between October and December which may have a bearing on the types of journeys taken.

Dublin dwellers were significantly less likely to drive than those in the rest of the country: whereas almost eight in every 10 journeys made outside of Dublin were by car this figure dropped to just over 6 in 10 journeys in the city.

Similarly the fact that people in Dublin were more likely to travel shorter distances meant they were more likey to travel on foot or by bicycle at 22 per cent of journeys compared to 14 per cent in the rest of the country.

But although journeys in Dublin tended to cover shorter distances travel times in the city were longer: it took almost 70 per cent longer to complete a trip of the same distance in Dublin than in the rest of the country.

The most common reason for people making a journey in 2014 was to travel to and from work with one in four people travelling for this purpose, up two percentage points compared to 2013.

The second most common reason for travel was to go to the shops at just under a quarter of all journeys while one in seven journeys were described as “companion/escort journeys” (otherwise known as dropping the kids off).

For its 2014 survey the CSO collected information from 10,382 respondents about 18,031 journeys made between October and December 2014.