Ian O'Riordan runs the new route for the Dublin Marathon and gives some tips on things to watch out for along the way. Video: Daniel O'Connor 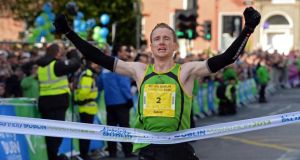 More than 14,600 people will run through the streets of Dublin this bank holiday Monday for the 35th Dublin marathon.

About 4,000 runners from 47 countries will join over 10,000 Irish entrants, 1,000 volunteers and countless spectators to take over Dublin city and its surrounds.

Race director Jim Aughney noted a “huge rise” in the number of Irish runners in 2014.

Organisers had to plot a slightly different course this year to avoid Luas roadworks in city centre, although parts of the route remain the same, including the climb up “heartbreak hill” on Roebuck Road.

Runners will follow a windy counter-clockwise loop that will take them past St Stephen’s Green, along the River Liffey and through the Phoenix Park twice.

The route dips south across the Grand Canal, through Bushy Park and around UCD before finishing at Merrion Square.

To ease foot traffic, runners will begin in three separate waves starting at 9am. The race starts slightly earlier for wheelchair entrants, who begin at 8:50am.

Rolling road closures on parts of the route begin today, and roads will reopen at various times tomorrow.

There are 10 water stations, where runners will drink 140,000 bottles of Tipperary water.

Four other stations will serve 43,000 bottles of orange Lucozade. Energy gels will be served at two stations along the route.

Runners registered for the race and collected their race numbers at the SSE Airtricity Dublin Marathon Expo in the RDS over the weekend.

Each runner received a microchip to wear to track their progress and official finishing time.

Spectators can track runners via an athlete tracking system on the marathon’s website. The system will also show live leader-boards during the event.

Sean Hehir, winner of last year’s men’s race, was the first Irishman to win the marathon in 20 years. He will not run this year.

Maria McCambridge, the winner of the women’s race last year, will defend her title tomorrow .

Also among the participants this year is 83-year-old John Collins from Limerick. This will be his 30th consecutive marathon.