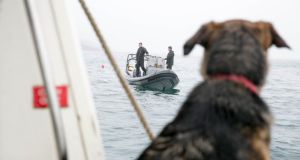 Experienced divers from across Ireland took part in the effort after an appeal for help in locating the 20-year-old while weather conditions were favourable for diving.

Mr Davis Ryan was last seen on June 30th when he entered the water near Beacon Point to try to rescue his girlfriend, Niamh O’Connor, who had been swept into the sea while they were out walking.

His father, Barry Ryan, then entered the sea to try to rescue the couple but all three were washed out to the Eastern Hole area. Both Ms O’Connor and Mr Ryan Snr were recovered shortly afterwards by Baltimore RNLI but died later.

Following the start of the operation at 6am some 200 dives were expected to be completed by 10pm, John Kearney, of the West Cork Underwater Search and Rescue unit, said.

The dive teams sought to cover an area approximately 300 metres by 900 metres and would be diving in depths ranging from six metres to 23 metres including some rocky terrain, he added.

Mr Kearney said he was overwhelmed with the response to the appeal for help in the search.

“We have divers coming from Mayo, Roscommon, Dundalk, Lough Ree, Clare, Kerry and huge number from Dublin as well as divers from all over Cork city and county,” he said. “And I could safely say that we would have another 50 divers at the weekend if we wanted them but unfortunately the weather is set to change early on Friday.”

He added that the poor conditions could last until Tuesday so the search team was keen to make the most of the opportunity presented yesterday.

Mr Kearney said more than 70 others had volunteered to help with boat support to transport divers out to the Eastern Hole. “It really has been an extraordinary response by people to this terrible tragedy.”

He also paid tribute to locals in Baltimore and Skibbereen who have made accommodation available for divers who have travelled long distances to stay overnight.

“People here have been fantastic both in terms of accommodation and food - we’ve had people coming down all day with food ready to serve to the divers when they come in.”