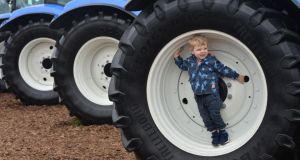 The Leader of the Opposition stands in a marquee, in the middle of a farm, at the height of Ireland’s biggest agricultural showcase.

He has an important statement to make.

The Government’s handling of the crisis in the beef industry? Fianna Fáil’s roadmap for rural Ireland? The imminent coronation of a National Brown Bread Making Champion?

“I think the Taoiseach should apologise to the Irish Museum of Modern Art, ” says Micheál Martin – which is one sentence we never expected to hear from him, or anyone else for that matter, at the Ploughing Championships.

But that was before a new class was unexpectedly added to this year’s list of competitions to go along with such standards as the three-furrow conventional, the intermediate reversible plough, the vintage senior furrow mounted and the under 40 horse. The senior conventional stroke – won on the spot by Enda Kenny – proved a lively addition to the programme.

And Micheál Martin called foul yesterday morning. As leader of Fianna Fáil, he’d be a good judge of political strokes. His party wrote the manual.

The Taoiseach and Fine Gael have bought it.

Enda arrived on site at Ratheniska after midday, straight off an overnight flight from Boston. He may love nothing more than gallivanting for Ireland along the east coast of the US, but he was never going to miss the Ploughing in Laois.

After paying his usual visit to the field to watch the competition, he returned to waffle his way around how his party thinks it’s fine to manipulate the membership of a State board to further their political ambitions.

The Taoiseach sounded unconvincing – for the simple reason that he was defending the indefensible, while also offloading responsibility to a greenhorn Minister he has only just appointed to Cabinet.

Heather Humphreys was not the mastermind behind the wheeze to stick John McNulty on the board of the Imma. The unfortunate woman just has to open her mouth to prove this. On this subject, she’s like the Taoiseach at the ploughing – all over the place.

This silly and familiarly depressing story of shameless stroke politics tarnishes Fine Gael in Government. It also casts a shadow over the TDs and Ministers putting themselves about at Ratheniska.

With the latest economic figures looking so promising, they should have been smiling. Instead, they were wondering how the party had gotten into such a silly mess. And they were also feeling sorry for their popular colleague Heather Humphreys, whom they think has been hard done by.

But this yarn will roll for another while. In the meantime, the fun continued down on the farm.

A party handler, appalled by the comparison, pointed out that the Taoiseach was travelling on State business, not a fundraising mission for his party.

In all, Enda spent almost six hours at the site in the course of his astonishingly energetic tour. As the ploughmen and women went through their paces in the top field, the Taoiseach walked the furrows for the traditional photocall. Then he stood behind an old-fashioned horse plough, holding on to the long arms and leaning forward, like he was about to launch a bobsleigh.

“If those horses take fight and jump back, he could be killed,” said an onlooker.

Back in the tented village, it was like a sauna in the Fine Gael tent. Stephen “The Horse” Sweeney, from Mayo, met the Taoiseach. Enda taught him way back in the 1970s.

Was he any good?

“Oh, he was a brilliant teacher. Very fir-im. Very fir-im” said The Horse, adding, “He was out on teacher practice at the time.”

There was a competition. “Win dinner for two in Dáil Éireann, sponsored by Charlie Flanagan. ”

No wonder these people are running the country.

When the Taoiseach emerged again, perspiring heavily following his stint in the sauna, he was mobbed by the crowd, which included two men dressed as cows and another dressed as a bowl of chips.

The Rose of Tralee shimmered into view, the epitome of cool. She was wearing her tiara, as you do with her blushing escort, Conor, in tow.

The pace was punishing. Always another baby to kiss and mammy to squeeze. You had to sit down where the opportunity presented itself.

It’s a strange feeling, taking a breather on a multipurpose calving aid while Come Down From The Mountain Katie Daly is blaring from a speaker as the Taoiseach waves an infant over his head.

One thing we learned is that Enda Kenny is a selfie-aware man. He knows exactly what to do when somebody grabs him and sticks a camera in the air.

The madcap dash to press the flesh had an end destination: the Aldi tent and the enthroning of the winner of the National Brown Bread Baking Contest.

The marquee was packed and dead silent when the Taoiseach made his entrance through the back door. Síle Seoige and Martin King, aka yer man who does the weather on TV3, began announcing the results.

“Is it Margaret Kelly?”

Her supporters heard her name and let out a volley of earsplitting shrieks. Aaargh!

“Or is it Betty Williams?”

Betty got the nod.

Enda grabbed Betty, who was clutching a large bouquet of flowers and sobbing while reporters probed Margaret, the magnanimous runner-up, for her recipe.

Then he was off again.

A man gave him a shopping bag with a biblical quotation on it. Enda held the bag up for the camera and gave the thumbs up, and the band played Send Me The Pillow That You Dream On.

And this is the God’s honest truth: such was the volume of babies being flung at the Taoiseach, some of them were wearing high-vis vests.

The Museum of Modern Art would kill for an installation like that.