Minister urged not to accept Meas nomination to RTÉ board 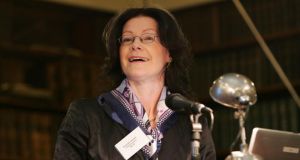 A call has been made for Minister for Communications Alex White not to accept the nomination of the outgoing chief executive of Mature Enjoyment of Alcohol in Society (Meas) to the board of RTÉ.

The head of the alcohol industry-funded body, Fionnuala Sheehan, is one of four people nominated last week by the Oireachtas committee on transport and communications to join the national broadcaster’s board.

Independent TD Róisín Shortall said it was “wholly inappropriate that a representative of the alcohol industry should sit on the board of the national broadcaster when the industry has such an interest in future broadcasting policies and practices, and when it has already acted to obstruct public health policy in this regard”.

But Ms Sheehan said that, whatever about any perception of conflict of interest, she was finishing with Meas in November and her membership of the board of RTÉ did not arise on that basis. She added that she would have no further connection with the alcohol industry once she stepped down from the organisation, which runs the drinkaware.ie website.

A spokeswoman for the Minister said Mr White “has not yet reviewed the nominations made for the RTÉ board by the joint Oireachtas committee. These nominations are for vacancies that are due to arise in February 2015 and appointments to fill these vacancies will be made in due course.”

But Ms Shortall said nobody dealing with the problem of alcohol from a public health perspective viewed Meas as “anything other than a representative of the alcohol industry”. She claimed the organisation was “singularly unhelpful, indeed obstructive, in the development of a national substance misuse strategy to deal with alcohol problems”.

The Dublin North-West TD pointed out that Meas regularly bought advertising time from RTÉ. She said the question had to be asked: “Who benefits most from a representative of the alcohol industry sitting on the RTÉ board, RTÉ or the alcohol industry?”

Defending her nomination, Ms Sheehan said she had formal training in company directorship and was very aware of the importance of independence on a board. She added that she had very broad experience in the civil and public sector, the commercial and private sector and in higher education as well as her role with Meas.