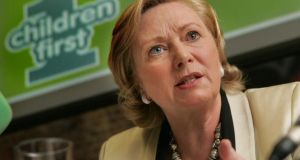 The Minister for Children and Youth Affairs Frances Fitzgerald: “Each and every one of us has a responsibility to safeguard children, to cherish more than our own sons and daughters.” Photograph: Matt Kavanagh

The introduction of concrete legal obligations to protect children was described as “a quantum shift” by Minister for Children Frances Fitzgerald.

“It moves the issue from vagueness to precision. It moves from a culture of ‘should report’ to one of ‘must report’.”

Ms Fitzgerald was introducing the Children First Bill 2014 which will legally oblige certain professionals and others working with children to report child-protection concerns to the Child and Family Agency.

“This Bill makes it clear that a mandated person is not being asked to assess the veracity or credibility of such disclosures,” she added. “The obligation is to report them immediately.”

The group, which included a representative of each Government department, would be required to review the implementation of the legislation and report on an annual basis to the Minister.

“This will ensure a continued focus on the implementation and compliance task until best practice becomes the absolute norm.”

The Bill, she said, operated side by side with existing legislation and had been developed on foot of significant consultations over the past two years, avoiding mistakes made in other countries.

Ms Fitzgerald said the objective of all the measures was to “move Ireland from the horrors of 20 years ago to where best practice is the absolute norm”.

Experts
She added that even with the best legislation and radically improved systems, child protection must never be thought of as something dealt with only by mandated persons and experts.

“Each and every one of us has a responsibility to safeguard children, to cherish more than our own sons and daughters.”

She said the Child and Family Agency would offer support to anyone with child-protection concerns on how to deal with them.

Ms Fitzgerald recalled that national guidelines for the protection and welfare of children were first published in 1999, operating for 12 years. In 2011, following a national review, she had launched the revised Children First national guidance.

“The decision to put in place Children First on a statutory basis is a commitment in the programme for government and arose from a recommendation in the 2009 Ryan report implementation plan.”

1 Election 2020: 10 key questions to ask candidates on your doorstep
2 Which jobs do teenage girls and boys aspire to have by age 30?
3 Independent TD Tommy Broughan announces retirement from Dáil
4 Eating out in Dublin – the homeless way
5 Election 2020: Peter Casey to stand in both Donegal and Dublin West
Real news has value SUBSCRIBE