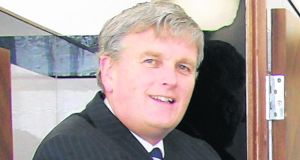 Jim Wells said the report showed minimum pricing reduced consumption and alcohol-related harm by ensuring alcohol cannot be bought at prices that do not reflect its strength. Photograph: PA

Northern Ireland is planning to introduce a minimum price for alcohol to try to combat alcohol abuse, the North’s Minister of Health, Jim Wells, has said.

Mr Wells said research by the University of Sheffieldwhich his department, the Department of Health in the Republic and the North’s Department of Social Development had commissioned, had convinced him that minimum unit pricing would curb immoderate drinking.

“The level of harm caused by excessive alcohol consumption in Northern Ireland is staggering,” Mr Wells said. “The total cost to the Northern Ireland economy is estimated to be as high as £900 million (€1.13 billion) per year, with the burden to healthcare alone costing up to £240 million per year

In 2013, provisional figures indicated 236 people died directly as a result of alcohol misuse in Northern Ireland. In 2013/2014 there were 12,255 admissions to acute hospitals with an alcohol-related diagnosis.

The current Minister for Health Leo Varadkar recently has reiterated his department’ssupport for such a move. “Work on developing a framework for the necessary Department of Health legislation is continuing and it is hoped to publish a general scheme of a Bill shortly,” he said in a Dáil answer.

Mr Wells however appears to have decided to press ahead more rapidly on minimum pricing. He said the Sheffield research demonstrated that “minimum pricing is a targeted measure, having a modest impact on moderate drinkers but a much greater impact on hazardous and harmful drinkers who make up around 20 per cent of the population but drink almost 70 per cent of all the alcohol consumed in Northern Ireland”.

“The evidence in the University of Sheffield’s report is compelling and, subject to (Northern) Executive agreement, I intend to put the issue out to public consultation and will be keen to see what feedback we get on this important issue,” he said.

“Alcohol misuse remains a significant public health issue for Northern Ireland. We owe it to those individuals who drink heavily, and their families, to do something about this,” added Mr Poots.

The department also cited the adult drinking patterns survey where over three-quarters of respondents (77 per cent) reported weekly drinking levels that would be considered moderate. Around one-fifth (19 per cent) consumed alcohol at levels which were hazardous, and 4 per cent reported harmful levels of drinking.

Dublin man found guilty of his father’s manslaughter 13:05
Fianna Fáil ‘will hold back €1.2bn’ of €11bn available to next government 12:57
Labour vows to slash the cost of childcare by up to two thirds 12:56
Case over pregnant woman kept on life support settled for €1.5m 12:54
RTÉ rejects calls for leaders’ TV debate on climate change 12:35