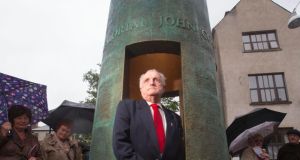 John Condon, nephew of Private John Condon, who is recorded as the youngest battle casualty of the First World War and was known as the Boy Soldier, at the unveiling of a monument to his uncle in Waterford today. Photograph: Patrick Browne

Waterford today honoured its war dead when it unveiled a specially commissioned memorial to the youngest recorded casualty on the Allied side in the first World War, Waterford-born Private John Condon who died in Flanders at the age of just 14.

Hundreds of people were on hand to see the specially commissioned sculpture by artist Paul Cunningham be unveiled in Cathedral Square by Mayor of Waterford Cllr John Cummins. Members of the Naval Service Reserve, the Organisation of National Ex-Servicemen and the British Legion were present.

The John Condon Memorial Committee chairman Cllr Tom Cunningham explained that the idea for €100,000 bronze cylindrical memorial, which stands 4.3 metres high, dates back over a dozen years when a number of local citizens contacted him to highlight that they felt was a serious omission.

“Some 4,800 people from Waterford city and county fought in World War 1 and over 1,100 of them perished and a number of people felt that they been airbrushed from history and should be remembered here in the city so that’s where the idea for the memorial came from,” he said.

“And although it’s named after the iconic figure of John Condon - the Boy Soldier- the youngest recorded casualty on the Allied side in World War I, it is dedicated to all men and women from Waterford who died in armed conflict including in our own War of Independence.”

Among those in attendance at the ceremony were John Condon’s nephew, also John Condon and his cousin, Willie ‘Sonny’ Condon as well as relatives of many others from Waterford city and county who also perished in the first World War.

Curator of Waterford Museum of Treasures Donnachadh O Ceallachain explained that John Condon, who was from Wheelbarrow Lane off Barker Street in the city. He lied about his age to join the Royal Irish Regiment as a reservist in 1913 and arrived in France in December 1914.

“John was attached to the Second Battalion of the Royal Irish Regiment and was involved in the Second Battle of Ypres in April and May 1915 when the Germans used poison gas to attack the Allies’ position and he died in the gas attack on May 24th, the second last day of the battle,” he said.

“He is buried at Poelkapelle near Ypres and his headstone records that he was just 14 years old and, according to Commonwealth War Graves Commission records, he was the ‘Youngest Known Battle Casualty of the War’ which has resulted in his grave being one of the most visited of the war graves.”