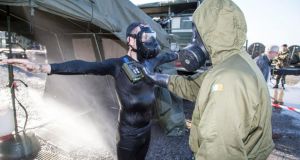 Medics with the International Committee of the Red Cross take part in training in surviving the effects of a chemical, biological, radiological or nuclear.

In the dystopian mock village setting beside the Defence Forces prison in Curragh Camp, all high walls and razor wire, two teams of Red Cross medics inch forward, clad head-to-toe in one-piece suits and rubber boots to protect against chemical and biological warfare.

“Remember, you are checking for wind direction,” Sergeant Anto Byrne tells Team A as they walk in parallel lines, down the slope into the “village” – several clusters of portable metal rooms and a couple of half-built breeze-block houses.

“Try not to bunch up,” shouts Byrne. “Situation awareness! Look left, right. If you see something on the ground that’s not yours, don’t pick it up.”

Team B follows, wheeling right as the track forks in the centre of the village. Team A veers left. They’re all holding chemical agent point detectors, palm-sized gadgets that will alert them to lethal danger in the air, should it be there.

“Gas, gas, gas, gas, gas!” shouts someone at the head of Team A. Everyone stops, crouches and whips a gas mask from their hip pouch, stretching the elastic straps behind their heads, pulling the goggle and tin air-filter devices over their faces.

Suddenly, there’s a thud and hissing as a cloud of mustard smoke starts to belch from the ground between the two groups. Getting the masks on becomes more frenetic.

It all seems quite real and the 14 medics with the International Committee of the Red Cross (ICRC) will be hoping this exercise, the culmination of their week-long training in surviving the effects of a chemical, biological, radiological or nuclear (CBRN) attack, is about as real as it ever gets for them.

First of its kind

The link-up with the ICRC started in the time of former minister for defence Alan Shatter and was brought to fruition in the Defence Forces by Col Jim Burke. “It’s all about surviving to function in a toxic environment,” he says. “Ireland and the ICRC share a lot of the same values about humanitarian assistance. We’re very comfortable with it.”

The second part of the exercise deals with decontamination. In a storage yard beside the prison, the engineers have rigged up a full-scale operation; huge tanks of water, delivery pipes and crime-scene tape are everywhere.

The 14 are shepherded into a queue by soldiers clad in CBRN suits. They are still masked and in their Red Cross dark blue CBRN suits, Camelbak water tanks strapped behind them, and black rubber boots.

One by one, they are given a visual check. Anyone’s pupils shrunk to pin-prick size? Any frothing of saliva? Tightness of the chest? Then it’s a series of measures to remove anything toxic.

First, they stand in a plastic basin and are sprinkled with fuller’s earth, a chemical absorbing clay that looks like oatmeal and which is trowled on and then brushed off.

Next, they stand in a cold shower, then it’s into a hot shower before their CBRN one-piece is peeled off, the boiler suit rolling into itself so there’s no contact with the outer surface.

The suit is bagged for (in real life) incineration, while the gas masks, finally removed from the faces of the 14, are dropped into a large bladder for sterilising with steam. The exercise takes time, organisation and lots of equipment.

“We would never have the magnitude of technology to do what’s happening here,” says one of the 14, Dr Mauro Dalla Torre (52), CBRN unit medical adviser at ICRC headquarters in Switzerland. “But it’s important [we know] the step-by-step decontamination process.

“We need to be familiar with the PPE [personal protection equipment] so that as medics, we can do our job in these conditions if it comes to that.”

Dawn Anderson (38) is an ICRC nurse from Canada who has worked for the Red Cross in Afghanistan and Gaza, and is impressed with the Defence Forces’ exercise. “They are just so organised. The equipment and how they run it is just click, click, click.”