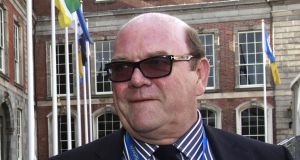 U2’s manager Paul McGuinness who has confirmed he is stepping down from his role as part of a deal which will see Live Nation buy the management teams of the Irish band and Madonna.

U2 manager Paul McGuinness stands to make more than $30 million (€22 million) by selling management rights to the band in a move that has taken the music world by surprise. Often known as the band’s fifth member or “Mr 20 per cent”, McGuinness has been U2’s manager from their beginnings in 1978 and was instrumental in their global success.

McGuinness made the announcement with a statement released to the New York Times. “It could be seen as slightly poor etiquette for a manager to consider retiring before his artist has split, quit or died, but U2 have never subscribed to the rock ’n’ roll code of conduct,” he said.

“As I approach the musically relevant age of 64, I have resolved to take a less hands-on role as the band embarks on the next cycle of their extraordinary career.”

Live Nation is in advanced talks to buy McGuinness’s Principle Management firm and Maverick Records LLC, the company run by Madonna’s manager Guy Oseary, for more than $30 million, the newspaper reported, citing people with direct knowledge of the matter.

U2 will now be taken over by Oseary, who will look after their affairs.

McGuinness described his successor as “the best manager of his generation, and there is no one else I would have considered to take over the day-to-day running of our business.”

He helped the band navigate the band at critical junctures of their career. Through him, they negotiated some of the best royalty deals in the business and he provided the business acumen to ensure that their stadium tours were big earners for the band.

He has also unapologetic been about the band’s decision seven years ago to move their tax affairs to the Netherlands, a decision which has led to accusations of hypocrisy, especially against Bono.

McGuinness has said that as a global business, U2 are entitled to order their tax affairs as they see fit in accordance with international law. He has pointed out too that U2 have given all the profits from their Irish concerts to charity.

He has also been fiercely critical of illegal downloading and predicted in an interview with The Irish Times three years ago that copyright theft could have dire consequences for traditional media.

“Not to sound over-dramatic, but frankly it has got to do with the future of civilisation and a culture within our society. If we allow it to become accepted that writers and artists and musicians are not entitled to get paid for their work and they are, in some kind of daft way, pursuing hobbies where we will be in the future? We will get news from Google search and the telcos [telecommunications companies] and the ISPs will dominate the horrible new world.”

Neither U2 nor McGuinness were available to comment last night.