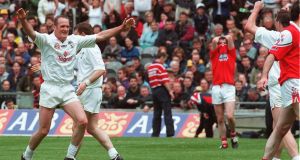 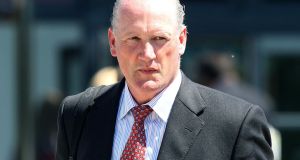 Willie McCreery was one of the 1998 Kildare team that played under legendary manager Mick O’Dwyer when he led the Lilywhites to a precious Leinster football title in 1998 - to end a 42-year famine.

Now based at Rathbride Stables near Newbridge, McCreery is relieved that one of the biggest GAA controversies in recent years - the row over the location of the Kildare/Mayo match, dubbed “Newbridge or Nowhere” - has been settled.

Since Monday, Kildare talked of little else: “Now that everything has finally been decided, it’s going to be a fantastic atmosphere in Newbridge on Saturday,” McCreery said, who forecasts a special atmosphere in the town.

Some in the county will have to choose on Saturday between a place at the Curragh for the prestigious Irish Derby 10 minutes away, or a 7pm showing at St Conleth’s Park for the match.

However, McCreery predicts that many will manage both: “The Derby goes to post at the Curragh at 5.15pm so people can be in Newbridge in plenty time if they’re going to the game or watching somewhere.”

Although St Conleth’s Park has a capacity of only 8,200, McCreery believes a large contingent of Mayo’s famous band of supporters will still travel to the “thoroughbred county”.

“A smaller Mayo crowd in the park should suit Kildare but I still think there will be lot of Mayo people coming for the occasion,” he said.

“They are great GAA people and will want to be there to support their team.”

The former midfielder added: “It’s probably Kildare’s best chance to beat Mayo because of home advantage and they know every blade of grass as they train there.”

Co Kildare Chamber chief executive Allan Shine said the fixture will pump up to €500,000 into the local economy, adding: “You’re talking about pubs, restaurants, filling stations all getting a slice and it will piggyback on the feel good factor from the Derby which is a three-day event now.”

Lilywhites superfan Gillian Murphy of Kildare GAA Fans on Facebook called on Kildare GAA to hire a big screen in Newbridge for people who don’t have tickets for the game.

She added: “Have it like a fanzone and charge a few euro in. The weather would be perfect and there could be a great atmosphere there.”

Murphy said the Newbridge or Nowhere campaign was about the wider GAA community coming together to finally take a stand.

She continued: “I’m very proud that it was Kildare who did it.

“Hopefully this is a turning point for everyone involved in GAA and will result in more fairness for teams across the country. Well done Cian O’Neill, the players, the county board and everyone who came out in support of us over the last 48 hours.”

Meanwhile, Mayo will receive a great welcome in Newbridge on Saturday according to Kildare South TD Martin Heydon.

“I want to congratulate the Kildare County Board for the resolve they have shown. I know many involved in Kildare GAA have been working round the clock to make this decision a reality.

“Players and management stood up for what is right, it would have been a terrible example if the GAA had failed to follow its own rules.

“Lessons must be learned from this crisis, in particular the GAA needs to now financially support Kildare County Board’s ambitious plans to upgrade St Conleth’s Park and increase the capacity of the grounds for the future. I will continue to work with the county board on their applications for future rounds of sports capital grants towards this project.

“I have been an officer on the committee of my own local club for over 10 years. I know how much it means to Kildare GAA supporters that this match is played in Newbridge.

“Saturday night in St Conleth’s Park promises to be a great occasion and I know the people of Kildare will give the Mayo supporters a great welcome.”