Former president recalls her inauguration 25 years ago this week 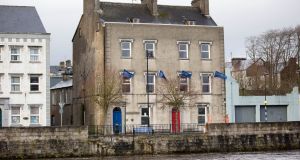 A quarter of a century after her promise to keep a symbolic candle in the window of Áras an Uachtaráin, former president Mary Robinson has outlined plans to brighten her north Mayo birthplace with the State’s first presidential archive and research centre.

The €8.35 million centre in her former family home – the 19th-century Victoria House, overlooking the river Moy in Ballina – will open in the second quarter of 2017, Mrs Robinson said in Ballina at the weekend.

Initial funding of €1.5 million has been provided by Mayo County Council to buy the house and to provide an adjoining site for construction of an annexe, along with architectural and design services.

Parts of 2 Victoria Terrace, originally purchased by her medical graduate parents Aubrey and Tessa Bourke, will be restored to their condition at the time of Mrs Robinson’s birth in 1944.

The State has committed just over €2 million through the Department of the Taoiseach, which will be matched by philanthropic funding, the centre’s project manager, Susan Heffernan, said.

There will be a museum, events centre and archive, which will house files relating to Mrs Robinson’s legal work, her presidential engagements from December 1990 to September 1997 and her term as UN high commissioner for human rights from 1997 to 2002.

Donated Mrs Robinson has donated her archive, valued at €2.5 million, to the State, under section 1003 of the Taxes Consolidation Act 1997, which provides that people who donate heritage items can credit the value against certain tax liabilities. It will be held in trust by the council.

The research facility will be run as an academic partnership with NUI Galway, and with the Mary Robinson Foundation for Climate Justice.

It will have a particular emphasis on the “critical area of women’s leadership”, unleashing “energy for change” through women’s empowerment.

Expressing her excitement about the project, Mrs Robinson said it represented a “give back” and “an opportunity for an institutional focus, long after I’m gone, on issues of human rights, gender and climate justice”.

Later this week – December 3rd – marks the 25th anniversary of her inauguration, and she said it was a day she would “never forget”.

She recalled that several months after embarking on her more active presidency, the then taoiseach, Charles J Haughey, had presented her with legal opinion to the effect that she was “doing too much” – which she successfully challenged.

She also paid tribute to Mr Haughey’s generosity in agreeing a budget which had “helped her greatly” in fulfilling her commitment to a more open and involved presidency.