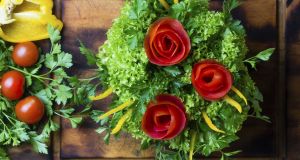 Peta: ‘By adopting meat-free eating habits, developed nations will save millions of animals’ lives and help the environment.’

Animal rights organisation People for the Ethical Treatment of Animals (Peta) has sent former president Mary Robinson a bouquet for suggesting people should eat less meat to save the planet.

Mrs Robinson’s remarks were made at a climate summit in Ottawa where she stated: “We need each of us to think about our carbon footprint. Eat less meat, or no meat at all. Become vegetarian or vegan.”

She has faced a barrage of criticism from farmers’ organisations in Ireland and from Independent TD Michael Fitzmaurice.

However, Peta has congratulated her and sent her an edible bouquet with blossoms of aubergines, peppers, and radishes.

Its director of international programmes Mimi Bekhechi said: “Kudos to Mary Robinson for highlighting once again that going vegan is by far the best way to fight climate change.

“By adopting meat-free eating habits, developed nations will save millions of animals’ lives and help the environment.”

Veganism is not only good for the planet but also part of a healthy lifestyle because vegans, she claims, suffer less from heart attacks, strokes, diabetes, and cancer.

“And of course, they spare many animals every year daily suffering on filthy, crowded factory farms and a terrifying death at the hands of the meat, egg, and dairy industries.”

An easy way to reduce individual carbon footprints would be “to radically examine whether it’s either necessary or desirable to fly around the world from seminar to seminar urging others to give up meat and dairy for the planet’s sake”, he said.

Mr Fitzmaurice, an Independent TD for Roscommon-Galway, wondered what plans Ms Robinson had “for the tens of thousands of people who would become unemployed as a result”. He too queried her carbon footprint.

He compared her comments to a “time long ago when the British aristocrats lived in big houses in this country with huge wealth and the poor peasants starved outside the gates”.

It was, he added, “one of the most bizarre statements that I have heard anyone of influence make in a long time. I am especially surprised that it is coming from a woman who comes from a county (Mayo) that is so reliant on agriculture.”

Mrs Robinson’s home in Pontoon, Co Mayo is currently on the market for €2.7 million.

Massbrook House has a Building Energy Rating (BER) of C2 which equates to a well-built rural property with oil-fired heating, insulation and efficient heating.

The Robinsons recently installed a wood chip pellet boiler in their home.