Martin McGuinness to brief US administration on deadlock 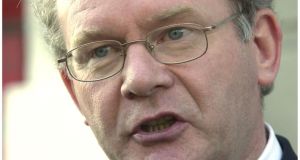 Sinn Féin Deputy First Minister Martin McGuinness is travelling to Washington today to urge the US administration to assist in breaking the deadlock threatening the Stormont institutions.

The opposition of Sinn Féin and the SDLP to British government welfare changes has resulted in the non-implementation of the Stormont House Agreement which promises £2 billion (€2.82 billion) in grants and loan-raising powers to the Northern Executive.

The impasse has also led to the passing of a “fantasy” budget which will leave the Executive with what DUP finance Minister Arlene Foster has called an “unsustainable” deficit of £600 million (€848 million) by the autumn.

Sinn Féin president Gerry Adams, Mr McGuinness and other senior party members met British prime minister David Cameron last week and warned of the potential “imminent collapse” of Stormont. There was no breakthrough at that meeting, described by Mr McGuinness as “useful”.

He now wants the US administration to exert pressure on the British government. Sinn Féin said he would brief the Friends of Ireland caucus on Capitol Hill, the State Department and other senior administration officials on the current political situation.

“It is my hope that the US administration – a key ally since the inception of the peace process – can help convince the British government to end their current approach which threatens to undermine the incredible progress we have made,” Mr McGuinness said .