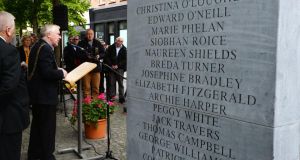 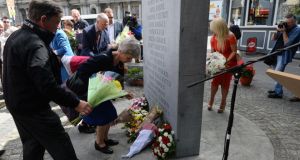 Relatives laying wreaths at the monument to commemorate the Dublin and Monaghan bomb victims on Talbot Street. Photograph: Cyril Byrne

Fianna Fáil Leader Micheál Martin has called for the British Government to open its files on the 1974 Dublin and Monaghan bombings for inspection by an independent judicial figure.

Thirty-four people, including a full-term unborn baby, lost their lives and 300 more were injured when three bombs exploded in Dublin during the evening rush hour on May 17th, 1974, with a fourth going off in Monaghan 90 minutes later.

Speaking on the approach of the 41st anniversary of the bombings Mr Martin said the new Conservative government in the UK had a chance to take action.

Releasing the files pertaining to the Dublin and Monaghan bombings would help victims and their relatives “to find the justice that has eluded them for decades”. Releasing these files to an independent judicial figure is the fairest way to deal with this legacy issue.”

Separately, Journalist and author Anne Cadwallader paid tribute to the band U2 for its decision to highlight the bombings on the band’s current tour.

Speaking at a ceremony in Dublin’s Talbot street to mark the anniversary of the bombings, Ms Cadwallader said the band had kicked off its two-year world tour in Canada this week playing the single Raised by Wolves, which focuses on the bombings. Throughout the 70-date tour, images of the victims of the bombings will be projected on screens when the song is played.

Ms Cadwallader said the inclusion of the images would facilitate the telling of the victims’ stories to a world audience, and while she believed ignorance of who was behind the bombings was no excuse, “many British people would be equally appalled as I am if they knew what I know now about our Government’s ignoble role in Irish affairs”.

Also addressing the gathering of about 100 people at the victims’ memorial on Talbot Street Lord Mayor of Dublin Christy Burke said there was no doubt responsibility Dublin and Monaghan bombings lay with British intelligence.

Mr Burke said he had personally heard the Dublin bombs detonate and he “knew on that day that we were dealing with British intelligence and other agencies or agents who decided to come to Dublin and attack the State”.

Mr Burke called on the incoming British Government to publish its files on the bombings and Minister of State Aodhan O’Riordan said many of the gathering could recall the horror of the tragic loss of life and continued to suffer the loss of their loved ones.

Among those present was Maura O’Hara who said she lost her first cousin Ann Marren with whom she shared a flat at the time. Ms Marren worked in Department of Posts and Telegraphs in Hawkins Street. She was a native of Lavagh, Ballymote, Co Sligo. Ms O’Hara said she goes to a commemorative mass every year to remember her cousin.

Also in the crowd was Margaret English, formerly Waters whose father Hugh Waters (60) was killed in a separate bombing in Dundalk on 19th December 1975. Ms English said she had only learned in recent years of the allegations of collusion between British intelligence and loyalists in placing bombs in the Republic. She was, she said “still trying to deal with it”.

“When I first heard it about 1999, I came to Dublin and I was told we know who killed your daddy… I just walked the streets. Nobody would believe what went on. I didn’t believe it”.

Maeve Taylor pointed out the spot opposite Guineys where she and her three children, aged seven, nine and 11 years were blown across the road. The children were badly injured but survived. She said there had been such carnage that when she had gone looking for a cardigan she had bought for her youngest child’s communion , she reached down to pick up a garment, only to realise there was an arm inside.

The gathering was organised by the group Justice for the Forgotten. Wreaths were laid by the Lord Mayor of Dublin, Minister of State at the Department of Justice and Equality, Mr Aodháin Ó Ríordáin, and Cllr Sean Conlon of Monaghan.