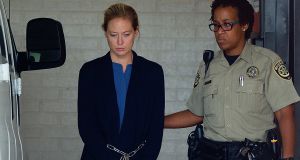 Molly Martens Corbett did not take the stand to testify in her trial was not questioned on presence of the paving brick on her nightstand . Photograph: Donnie Roberts/The Dispatch

The uncle of Molly Martens Corbett, Michael Earnest, has claimed the brick used to hit her husband Jason Corbett was on her nightstand as it was being used for a children’s art project.

Mr Earnest, speaking to several Sunday papers in Ireland, claimed the crucial piece of evidence, and one of the weapons that killed Limerick man Jason Corbett (39), was on Ms Martens Corbett’s nightstand because it was part of a children’s art project.

Jack (12) and Sarah (10) are Jason’s biological children from his first marriage. Jason Corbett’s sister Tracey and her husband David Lynch were granted custody of the children after his death.

Speaking to the Sunday Independent on the presence of the paving brick in Molly’s bedroom on the night Jason was killed Mr Earnest said: “The reason was, I recall, that there was a craft thing the kids were involved in. Molly was helping them with it and they were painting the brick”.

Crime scene photos from the night, released by the Davidson county District Attorney’s office, show no visible signs of any paint on the paving brick.

On Wednesday a jury found Martens Corbett (33) and her father Thomas Martens (67) guilty of the second degree murder of her husband, Limerick man Jason Corbett. The pair were sentenced to 20 to 25 years in prison.

Molly Martens Corbett did not take the stand to testify in her trial, and so neither the defence or the prosecution could question Ms Martens Corbett on the presence of the paving brick on her nightstand on the night of the killing.

Two jurors on the Davidson county court case said they believed Jason Corbett was asleep when his wife Martens Corbett struck him with the brick. Speaking on US TV network ABC, one member of the jury Miriam Figueroa said blood in the pair’s bed led the jury to believe Mr Corbett had been asleep when first hit by Ms Martens Corbett.

“There was blood on the pillow and on the comforter. That may have been the first blow, and then it progressed from that point where he got out of bed and she might have struck him more than one time in bed,” she said.

In Martens Corbett’s one-page written statement to local police on the day of the killing she stated her husband had started to choke her after a fight, and wrote “I tried to hit him with a brick I had on my nightstand. I do not remember clearly after that.”

District Attorney Garry Frank said the brick was the “smoking gun” in the prosecution’s consideration to potentially take a first degree murder charge for the killing of Jason Corbett by his wife and father-in-law.

The North Carolina Davidson county DA said the brick kept on Martens Corbett’s nightstand, which was used to kill Jason Corbett, “strongly” suggested the murder was intended and premeditated.