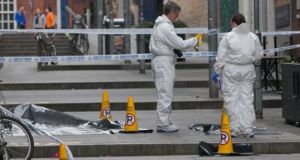 Gareth O’Connor the 27-year-old Clondalkin man who lost his life after an altercation in Dublin’s Temple Bar earlier this month, was the “blue-eyed” life and soul of his extended family, his requiem mass has been told.

In a moving address read out at “Garzy’s” funeral on Saturday, Natalie Devitt said she had made a promise as she stood over Mr O’Connor’s coffin that he would always be her “babe”, and that his children would never forget him.

She said Mr O’Connor had “never had it easy and that is putting it mildly”, after his parents died when he was just 13 years. But she said no matter what happened he was the love of his family’s life and she would raise their three children “to know the love he had for them”.

Mr O’Connor died in St James’s Hospital, Dublin, after receiving a head wound in an altercation in Cows’ Lane, Temple Bar, on September 10th. Gardaí have interviewed a number of people and a file is being prepared for the director of public prosecutions.

Welcoming Mr O’Connor’s remains to the Church of the Immaculate Heart of Mary in Rowlagh, Clondalkin, Fr Abraham Pathackal George said “death comes as a thief” and the way to prepare was to acknowledge the “real and tragic presence of it” in the world.

Fr Abraham told the capacity congregation “Garzy was a great fan of Liverpool FC” and a much admired member of the local football team, Arthur Griffith Park Football Club.

He said Mr O’Connor was a funny man and a great footballer, whose siblings said he was “the best person in the family and loved by a large circle of friends”.

“He loved his kids very much, he adored his life” said Fr Abraham who noted the gifts brought to the alter to represent aspects of Mr O’Connor’s life. These included a pair of orange, Nike football boots, an orange football, a Play Station control, a pair of slippers, a packet of crisps and a bottle of coke. “His favourite TV show was Partners in Crime” said Fr Abraham adding to laughter among the congregation: “He was like a big child, who never grew up”.

Mr O’Connor’s remains were brought to the church in a horse-drawn funeral carriage which was bedecked with floral tributes reading “dad” and “cousin”. A flat backed van carried further bouquets and floral tributes .

Gardai are continuing to appeal to anyone who may have witnessed the incident in Temple Bar or who were in the vicinity of Cow’s Lane at the time to contact them.

More than 1,400 nursing home healthcare workers infected in outbreaks – HSE 01:27
Tax on Covid-19 payment could cause 'terrible shock' late in year 01:02
Covid-19 restriction-lifting may speed up if cases keep falling 01:00
Slain Army private’s son calls on SF to acknowledge act of murder 01:00
Traveller realities amid the pandemic: ‘I thought I’d never see a sup from a tap again’ 01:00

1 Maureen Dowd: Trump has been wearing a mask for years
2 Archaeologists are ‘quite sure’ they have found Red Hugh O’Donnell’s burial place
3 Tax on Covid-19 payment could cause 'terrible shock' late in year
4 Covid-19 restriction-lifting may speed up if cases keep falling
5 Pricewatch: Left on the shelf - what we are no longer buying
Real news has value SUBSCRIBE