Man due in Glasgow court over death of Karen Buckley

Scottish police have confirmed that the body that was discovered on a farm in north Glasgow is that of missing Cork woman Karen Buckley. Video: Police Scotland 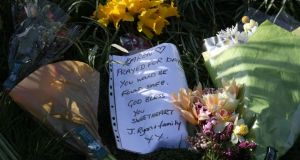 A 21-year-old man is due to appear in court in Glasgow on Friday in connection with the death of Irish student Karen Buckley as police confirmed a body found on a farm outside the city was that of the missing nurse.

Police on Thursday confirmed the worst fears of Ms Buckley’s family as her father, John, told of the devastation at the loss of their only daughter.

Ms Buckley had moved to Glasgow in January to study occupational therapy.

Mr Buckley and his wife, Marian, had travelled from their home in Mourneabbey in north Cork to Glasgow on Monday morning after they learned that their daughter had failed to return from a night out with friends in the Scottish city on Saturday.

“Marian and I, together with our sons Brendan, Kieran and Damian, are absolutely heartbroken,” said Mr Buckley in a statement which was read on his behalf at a press briefing by Det Supt Jim Kerr of the major investigations team in Glasgow.

“Karen was our only daughter, cherished by our family and loved by her friends. She was an outgoing girl, who travelled the world where she met lots of people and thoroughly enjoyed her life. We will miss her terribly.

“We would be very grateful if we could be left alone now to grieve with our family and friends,” said Mr Buckley.

Det Supt Kerr, who has headed the Police Scotland investigation into Ms Buckley’s disappearance, said: “We cannot begin to imagine the pain and suffering of Karen’s family and friends and all our thoughts are with them at this very sad time.”

Under Scottish law, a person can be detained if police suspect them of a crime but once police had evidence or information to link them to the crime, they can then upgrade the detention to a formal arrest.

Ms Buckley’s body was found at a hillside farm at High Craigton, some 13km north of Glasgow on the Stockiemuir Road on Wednesday.

Police informed Ms Buckley’s parents and her brother Kieran, who had travelled from Australia, of the discovery.

The Irish Times has learned that a postmortem was carried out by a pathologist on the body at a Glasgow hospital on Thursday afternoon but police have not revealed the results of the postmortem.

However, it is believed to add significantly to their investigation.

Meanwhile, Pamela Gillies, principal of Glasgow Caledonian University, where Ms Buckley was studying occupational therapy, spoke of the huge sense of loss among her fellow students and the university community.

“It is so tragic to lose someone so young and talented in such difficult circumstances.”