Man dies after being washed into sea in Co Clare 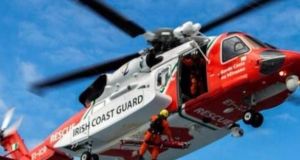 The Shannon-based helicopter Rescue 115 was deployed to help with the incident. File photograph: Rescue 115/Facebook

A man has died after he was washed into the sea in Co Clare this afternoon.

The man (30), who was rushed to hospital by helicopter, is believed to have been taking photographs at the base of a cliff at Creeragh off the Dunlicky coast road near Kilkee. It is understood he was struck by a wave and washed into the sea. He was taken University Hospital Limerick in a critical condition and later pronounced dead.

The man is believed to be from Hungary and living in Oranmore Co Galway. His partner was with him at the time while the alarm was raised by an onlooker on the cliff.

The incident happened just a short distance from where Irish Coast Guard volunteer Caitríona Lucas died tragically, in the line of duty, in September 2016.

The scenic spot, close to Dunlicky Castle, is popular with tourists, photographers and shore anglers. The man is believed to have made his way down to the base of a cliff before he was hit from behind by a wave. The scene is located close to a public carpark and viewing area.

Emergency services were alerted at around 3.30pm and a major search and rescue operation was mounted. Gardaí and volunteers from the Kilkee unit of the Irish Coast Guard were dispatched to the scene while the Shannon based Irish Coast Guard helicopter, Rescue 115, was also tasked to assist in the search.

The helicopter crew soon located the man and winched him on board the aircraft. The man is believed to have been found face down in the water.

Gardaí are investigating the circumstances of the incident.