Luas strike: State will stay out of dispute, Minister says 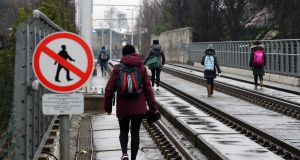 The State’s industrial relations machinery will only intervene again in the Luas dispute if there is a willingness on all sides to come to the table on a reasonable basis to seek a resolution, the Minister for Transport has said.

Paschal Donohoe said “everyone is a loser” as a result of the current industrial action.

About 90,000 passengers will again have their travel plans disrupted today and tomorrow as Luas staff stage a second 48-hour strike in a dispute over pay and conditions.

Dublin Bus said its full fleet would be deployed during the morning and evening peak travel times but that services were expected to be busier than normal.

It will not be accepting Luas tickets.

A spokeswoman for Dublin Bus said while there was an inter-agency agreement to accept other operators’ tickets at times of severe weather, accidents and service breakdowns, this did not extend to periods of industrial action.

Luas staff are seeking pay increases of between 8 and 53 per cent as well as improvements in their conditions.

They staged a 48-hour stoppage last week and are planning to hold further strikes on March 8th and on March 17th, St Patrick’s Day.

Mr Donohoe said the timing of the strike on St Patrick’s Day, a holiday that would bring thousands of tourists and over €70 million to Dublin city, was “very damaging”.

He said it was being organised in a way that created “maximum damage to our city” during a time in which Dublin was trying “to get back on its feet”.

He said these bodies had a track record of dealing with disputes and were standing ready.

However, he said the Workplace Relations Commission and the Labour Court would only intervene “if there was a willingness on all sides to come to the table on a reasonable basis and put together a platform to resolve the dispute”.

“The matter has got more serious, and the matter has the potential to become more intractable and more difficult with the dates that were announced.

“I spoke to the workers on the picket line last week. They want a resolution, they want no more industrial action. But they are equally resolved to get what they consider to be a fair and just outcome.”

Luas operator Transdev is facing penalties of €100,000 per day from the National Transport Authority for failing to deliver the light-rail service under the terms of its contract with the State organisation.

Staff will lose four days’ pay this month, while the company said their annual bonus of 6.5 per cent will not be paid.

Transdev meanwhile has urged passengers not to walk on the Luas lines during the strikes. It said although there would be no tram service it was against the law to trespass on Luas tracks and property.

“The overhead lines will be live and maintenance will be working on parts of the system.”