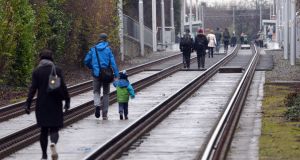 About 90,000 Dublin passengers will see their travel plans disrupted on Thursday and Friday as Luas staff stage a second 48-hour strike in a dispute over pay and conditions.

It will be the third and fourth day of strike action following last week’s stoppage and will affect about 180,000 people travelling in Dublin over the two days.

Services stopped at midnight on Wednesday and resume on Saturday at 6.30am, according to information on the Luas website.

Management says Luas tickets will not be redeemable on any other form of public transport during the strike and customers intending to purchase prepaid tickets “may wish to consider alternative ticket options”.

Dublin Bus said its full fleet would be deployed during the morning and evening peak travel times but that services were expected to be busier than normal.

A spokeswoman for Dublin Bus said while there was an inter-agency agreement to accept other operators’ tickets at times of severe weather, accidents and service breakdowns, this did not extend to periods of industrial action.

Luas staff are seeking pay increases of between 8 and 53 per cent as well as improvements in their working conditions.

Luas management have said staff who are taking part in strike action will have up to four days of pay deducted this month.

Luas operator Transdev said a continuation of the current pay dispute will “undermine the company’s ability to protect existing terms and conditions”.

Minister for Transport, Tourism and Sport, Paschal Donohoe said that the timing of the strike on St Patrick’s Day, a holiday that brings in thousands of tourists and over €70 million in revenue to Dublin city, is “very damaging”.

He said it was being organised in a way that does “maximum damage to our city” during a time in which Dublin is trying “to get back on its feet.”

The Minister said the State’s industrial relations machinery will only intervene again in the Luas dispute if there is a willingness on all sides to come to the table on a reasonable basis to seek a resolution.