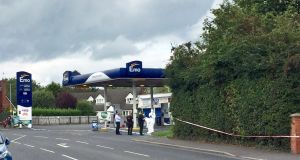 Forensics examining the scene outside a petrol station in Co Down where a murder investigation has begun. Photograph: David Young/PA Wire

The victim of the shooting in Co Down on Monday night has been named formally as 54-year-old Malcolm McKeown, a well-known career criminal with loyalist paramilitary connections.

He is one of a trio of brothers who were implicated in Loyalist Volunteer Force (LVF) activities in the mid-Ulster area. His brothers, Trevor and Clifford, were convicted of separate LVF sectarian murders.

All three were closely connected with the LVF leader Billy Wright, known as King Rat, who was murdered by INLA inmates in the Maze prison in 1997.

Mr McKeown was discovered dead in his car at the rear of a filling station in the village of Waringstown on Monday night.

PSNI Detective Chief Inspector Peter Montgomery said, “Mr McKeown, who was a father of three, was shot in cold blood in broad daylight and I have now launched a murder investigation.”

Det Chief Insp Montgomery said his investigation was at an early stage and that he was keeping an “open mind” as to the motive for the murder.

“I know that Mr McKeown entered the shop at Dewarts Garage at approximately 7.15pm on Monday and when he came out he walked to his vehicle parked to the side of the garage. It was around this time that the gunman or gunmen shot him,” he said.

He added that a blue coloured car was seen leaving the scene and subsequently a VW Passat, registration VRM RK62 PLX was found burnt out on the Glenavon Road in Lurgan later on Monday night.

The officer appealed to anyone with information about the killing to bring it to the police.

Malcolm McKeown, according to security, political and local sources, was heavily involved in the drugs trade in the Lurgan-Portadown-Banbridge area of mid-Ulster, and his murder may be linked to that activity.

He faced trial in 2012 charged with the murders the previous year of Hugh McGeough and his wife Jacqueline in Co Armagh.

It was alleged that the McGeoughs also were involved in drug dealing and that Mr McGeough issued a death threat to Malcolm McKeown over a £13,000 debt. It was claimed that he ordered the double murder as a result of that, although Malcolm McKeown did not carry out the actual shootings.

The following year the case against him and an associate named James Carlisle were dropped.

In March 2016, Carlisle was shot a number of times in a drive-by shooting close to the gates of St Brendan’s Primary School in the Moyraverty area of Craigavon. He survived the attack which was believed to be part of a gangland feud in the mid-Ulster area.

Clifford McKeown was convicted of the murder of Catholic taxi driver Michael McGoldrick in Lurgan. He was shot dead during the Drumcree Orange Order parade standoff near Portadown in July 1996. His trial heard that Clifford McKeown described the murder as a “birthday present” for Billy Wright.

The same trial heard that Clifford McKeown had spoken of an initial plan by Wright to abduct and murder three Catholic priests but that this plan was abandoned because Wright feared the IRA would kill Protestant clergymen in retaliation.

Trevor McKeown was convicted of the 1997 murder of 18-year-old Catholic Bernadette Martin. She was shot four times in the head at point-blank range as she lay sleeping with her Protestant boyfriend at his family home in Aghalee in Co Armagh.

Clifford and Trevor McKeown received lengthy prison sentences but both were released early under the terms of the Belfast Agreement.

Politicians said that people were shocked at the murder of Malcolm McKeown.

“A PSNI investigation is now underway and that must be allowed to proceed. I would encourage anyone with information on what happened to bring it forward to the police,” he said.

SDLP MLA Dolores Kelly said: “The local community is in shock after the violent murder of a man in a shooting in Waringstown. This is a quiet, settled village and people are appalled that violence has been brought on to their streets.”

“Resources must be given to the police to tackle criminality within society,” he added.