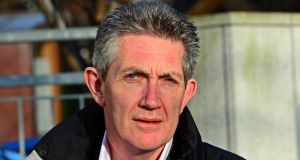 Eoin Ronayne, general secretary of the CPSU said the Lansdowne Road agreement was a ‘start on the road to the full restoration of all pay and conditions’. Photograph: Eric Luke/The Irish Times

However, members of the trade union Unite who work in the public service have opposed the accord in a ballot.

The Civil Public and Services Union (CPSU), which represents about 13,000 lower-paid staff in the Civil Service backed the deal by a 2:1 margin in a ballot.

CPSU general secretary Eoin Ronayne said the union viewed the Lansdowne Road agreement “as just a start on the road to the full restoration of all pay and conditions cut since 2008”.

He said CPSU members recognised the “flat- rate” mechanism used to restore some of the pension levy and basic pay in the deal prioritised lower paid workers. However, he maintained that “the failure of the Government to put more than €270 million a year on the table meant many long- serving, lower- income public servants at the top of their scales felt aggrieved”.

Mr Ronayne said the CPSU would be seeking the application of a similar “flat rate” mechanism for future pay restoration in the discussions on a new pay determination system for the public service which is provided for in the accord.

He said the Government’s refusal to roll back the additional unpaid hours for staff introduced under the 2013 Haddington Road agreement had been “very contentious”. He said this issue would have to be a priority in any subsequent agreements with the Government.

Members of the Public Service Executive Union (PSEU), which represents about 10,000 mid-ranking staff inthe Civil Service, voted to back the Lansdowne Road deal by 69 per cent to 31 per cent.

The Irish Federation of University Teachers (IFUT) said in a ballot 310 members backed the Lansdowne Road deal while 132 opposed it, representing a 70 per cent acceptance rate.

Ifut deputy general secretary Joan Donegan said the union would now cast its vote in favour of the Lansdowne Road deal at a meeting of the Public Service Committee of the Irish Congress of Trade Unions scheduled for Wednesday.

Meanwhile the trade union Unite said its members in the public service had overwhelmingly voted to reject the Labnsdowne Road agreement.

Unite regional co-ordinating officer Richie Browne said that more than three-quarters of the union’s members in the public service believed that that the Lansdowne Road proposals negotiated at the end of May were insufficient to compensate them for the losses suffered since 2009.

“The overwhelming vote to reject the Lansdowne Road proposals reflects the anger felt by members. Public sector workers who provide the services on which we all rely have paid for a crisis not of their making.

“In addition to pay cuts, the pension levy and increased taxes and charges, our members have faced job losses, cuts in sick pay and longer hours. They have also been dealing with the increased pressures associated with the public sector recruitment moratorium. “

Mr Browne said Unite would “continue making the case for full restoration of our members’ terms and conditions”.

Under the Lansdowne Road deal, most public service personnel will receive an increase in earnings of about €2,000 in three phases between January 2016 and September 2017.

However, when the deal was being negotiated, the Government decided at the 11th hour to drop plans in an original draft for a €1,000 pay hike for those deemed to be higher earners scheduled for 2017.

This increase will only now apply to those earning less than €65,000.

The Lansdowne Road agreement is expected to be formally ratified by the Public Service Committee of the Irish Congress of Trade Unions this week as a number of the country’s larger unions - such as Siptu, Impact and the Irish National Teachers’ Organisation - have already backed the accord in ballots of their members.