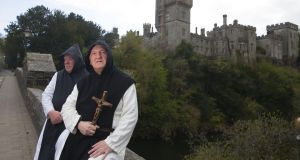 Actors Edward Lynch and James Lenane of Lismore Dramatic Society, Co Waterford, in costume ahead of ‘Lismore through the Ages’, a live pageant which celebrates the town’s 25th Anniversary as a Heritage Town on Saturday, May 14th. Photograph: Patrick Browne

One of Ireland’s most historic towns is to mark its 25 years as a Heritage Town with a pageant and parade next weekend which will highlight its role as a centre of ecclesiastical centre as well as its contribution to science and learning over the centuries.

Lismore Heritage Centre is putting the finishing touches to celebrations with hundreds expected to line of Lismore, Co Waterford, next Saturday, May 14th for the pageant and parade which will trace the town’s history.

The centre’s project manager, Mealla Fahey, said towns such as Lismore have really benefitted under the Heritage Town initiative and the town decided the best way to mark its 25 years of heritage status was to celebrate the town’s historic past.

She said: “Lismore, just like Cobh, Listowel, Abbeyleix and Adare and other Heritage Towns have flourished under the Heritage Town programme and we hope that enthusiasm behind this initiative be still be evident in another 25 years.

“Lismore is steeped in history and there is so much to see, do and experience here. The 25 year celebrations offer the public a great opportunity to appreciate our living history and we hope for a massive turnout.”

According to Ms Fahey, Heritage Town status is much more than just a badge of honour or a marketing initiative and Lismore has recently been selected as a pilot area for the Adopt a Monument Scheme which is being run by the Heritage Council.

The celebrations will feature the unveiling of a replica of the Lismore Crozier which dates from 1100 AD and was presented to the first Bishop of Lismore. The pageant will recognise the role of St Carthage, who founded a monastery in the town in the 7th century.

“The pageant which is being staged by Lismore Dramatic Society is also going to feature the Elizabethan explorer, Sir Walter Raleigh who lived for a time at Lismore Castle as well as Sir Richard Boyle who also lived in Lismore and is regarded as the father of modern chemistry.”

The pageant will feature the many Dukes of Devonshire including the 9th duke, Lord Charles Cavendish who married Adele Astaire, sister of Fred Astaire. Former US president John F Kennedy, who visited the town in 1947, will also be included.