Life of former US ambassador Dan Rooney celebrated in Dublin 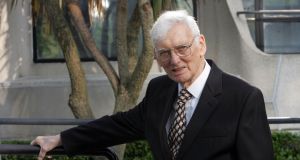 Dan Rooney lived a life of engagement and commitment to the things he loved and believed in, a memorial service for the late US ambassador to Ireland heard.

In his Homily, Rev Fr Patrick Claffey recalled getting to know Mr Rooney when he would “jog into the sacristy” in a tracksuit on Saturday mornings and proceed to discuss US politics in depth.

Fr Claffey said Mr Rooney had been a man “completely rooted in who he was”. “I think we can safely say there wasn’t a hint of affectation about him,” he said.

Kieran McLoughlin, president and chief executive of The Ireland Funds, said the fact that his funeral and memorial service had been attended by two heads of State was an indication of the extraordinary and profound impact Mr Rooney had on both countries.

He had been at the fulcrum of Irish-American relations for his entire life.

Mr McLoughlin said such a description would cause Mr Rooney to “recoil” because he “absolutely abhorred aggrandisement of any kind”.

He noted Mr Higgins was the second president to mark Mr Rooney’s passing. His funeral two months ago at an “overflowing” cathedral in Pittsburgh had been attended by former US president Barack Obama.

Although a lifelong Republican, Mr Rooney was an early supporter of then US junior senator Mr Obama and helped the Democrat win over key blue-collar areas in Ohio, Virginia and Pennsylvania in his 2008 presidential election victory.

Mr Obama named him ambassador to Ireland in 2009, a role in which he served until 2012.

Mr McLoughlin said it had been Mr Rooney’s absolute belief in a peaceful, prosperous Ireland that had motivated him, along with his friend and philanthropic partner Dr Anthony O’Reilly to establish The Ireland Funds in 1976.

Of all the roles he held, the most important to him was his role as patriarch. He had been a proud great-grandfather, grandfather, father, a brother and husband.

The very bedrock of his life had been his wife of 65 years, Patricia, who had been his constant companion, his consort, his champion and his dearest friend.

Mr Rooney had also funded the Rooney Prize for Literature and had been so proud of the winners and knew those writers personally, Mr McLoughlin said.

Recipients have included Neil Jordan, Frank McGuinness, Anne Enright and Paul Mercier, who was present at the service.

The attendance also heard of Mr Rooney’s love of American football, as a long-time owner of the Pittsburgh Steelers.

The Mass was celebrated by Fr Claffey, Mgr Piotr Tarnawaski and the Rev Fr Timothy Lehane.

Music was provided by vocalist Eimear Quinn, Mick O’Brien on uilleann pipes and Ewan Cowley on guitar and piano.