WT Cosgrave’s government was responsible for the execution of 77 anti-Treaty rebels during the Civil War, an action which caused lasting bitterness 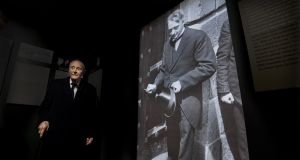 Former taoiseach Liam Cosgrave stands in front of a photograph of his father WT Cosgrave at the GPO Witness History Visitor Centre during its official opening in 2016. Photograph: Brenda Fitzsimons / THE IRISH TIMES

The former Fine Gael taoiseach Liam Cosgrave, who died this week, made an impassioned defence of his father’s actions during the Civil War in a speech delivered four years ago.

William T Cosgrave’s government was responsible for the execution of 77 anti-Treaty rebels during the Civil War, an action which caused lasting bitterness.

William T Cosgrave was chairman of the provisional government from August to December 1922, then president of the executive council from 1922 to 1932 (effectively the taoiseach).

Rory O’Connor, Liam Mellows, Josephe McKelvey and Richard Barrett were all taken from Mountjoy Jail and executed just a day after Hales was gunned down on the streets of Dublin in December 1922.

Liam Cosgrave made a speech at the unveiling of a plaque to his father in St James’s Street, Dublin, in 2013. The plaque, on the site where WT Cosgrave was born, was sponsored by the Kilmainham and Inchicore Heritage Group.

Mr Cosgrave said his father had been “quite ruthless and clear” in his determination to uphold the will of the Irish people especially as the people had voted three to one in favour of pro-Treaty candidates in the Irish general election of June 1922.

Mr Cosgrave said the execution of the four republican leaders took place in the context of a vow by the anti-Treaty IRA to kill any TD who voted in favour of the passing of the Public Safety Act which allowed for the execution of those who had taken up arms against the National Army, which supported the government .

It was in that context that the four republican prisoners were executed.

“There was an outcry against it,” Liam Cosgrave recalled. “It was quite unusual in every respect, but it was the last time a TD was shot. As a result of that, it took some time, at an immense cost, to pay for the Civil War, about £35 million, which at the time was a gigantic sum.

“After a lengthy period of something over a year, the Civil War came to an end and work began in earnest on the rebuilding of the State. He and his colleagues did an immense good.”

Mr Cosgrave also defended his father’s action at a speech at the launch of Michael Laffan’s book, Judging WT Cosgrave, which was published by the Royal Irish Academy in 2014.

Mr Cosgrave recalled how his father had been burnt out of his home by anti-Treaty forces in 1923. At the time Liam Cosgrave was three.

“We had to move as a family. He brought me to his mother and my mother brought my brother to her father. Later we were joined together in an army barracks in the Curragh.

“He [William T] had to take very strenuous actions against the irregulars. The actions taken were severe, but they were effective. The result of that was that the government continued to function effectively and despite great difficulties succeeded in restoring order.”

Mr Cosgrave died believing that his father and his father’s government colleagues never got the credit they deserved for establishing the State and stabilising its institutions.

One of his last public acts was to be present at the opening of the GPO Witness History exhibition in 2016. He then viewed a photograph of his father opening the rebuilt GPO in 1928.