Lessons must be learned from Fennelly report, says Donohoe 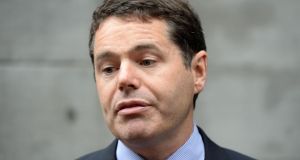 Minister for Transport Paschal Donohoe said he was “happy with how the Taoiseach conducted himself”. Photograph: Frank Miller/The Irish Times.

Lessons must be learned from the report of the Fennelly Commission, according to Minister for Transport Paschal Donohoe.

Donohoe said the chief lesson was that correct protocols and adherence to the Constitution should always be followed in such Government crises.

He also said the Fennelly Commission had made it clear there was a difficulty with how information was shared in the crisis surrounding the resignation of the Garda Commissioner.

Mr Donohoe said he believed this adherence to law was followed in events surrounding the resignation and while there were “difficulties in the way information was shared” he was “happy with how the Taoiseach conducted himself across that period”.

“It was a very difficult period but he handled that matter entirely in accordance with the law and with the responsibilities that are placed upon him as Taoiseach.

“He himself has acknowledged that the Fennelly report make it clear there are things that we do need to learn from, in relation to how matters like this are dealt with, but the Taoiseach acted fully in compliance with the law”, Mr Donohoe said.