Gareth Hutch (35) a nephew of Gerry Hutch, also known as The Monk, has been shot dead in a gangland attack in Dublin. The victim had expressed fear for his life to Cllr. Nial Ring hours before he was gunned down. Video: Bryan O'Brien/Ronan McGreevy 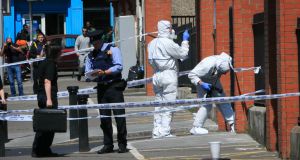 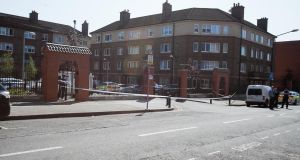 Gardai at the scene of a fatal shooting on North Cumberland Street, in Dublin. Photograph: Collins 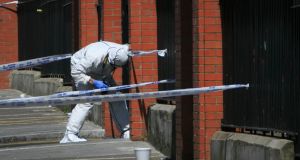 A garda searches for evidence after the killing of Gareth Hutch at North Cumberland Street, Dublin, May 24th, 206. Photo: Gareth Chaney/Collins

The latest apparent victim of the Kinahan-Hutch gangland feud feared for his safety and wanted to move apartment, it has emerged.

Local Independent councillor Nial Ring said the dead man, Gareth Hutch (35), the father of a young boy, had called to his constituency office on Monday seeking new accommodation within the same apartment complex.

Gareth Hutch was shot dead on Tuesday morning in the Avondale House complex in Cumberland Street North in Dublin, a few hundred metres from O’Connell Street.

He is believed to be the seventh victim of the bloody dispute between the Kinahan and Hutch families.

While Gareth Hutch was well known to gardaí, he was not regarded as a major player in the underworld. However, he was a member of an armed gang that tried to rob a cash in transit van bringing money to an ATM machine in Co Dublin in 2009.

Gareth Hutch was a cousin of Gary Hutch, who was killed in Spain last year, and nephew of murdered Eddie Hutch Snr, who was shot dead at his home in Dublin’s north inner city in February. He is also the nephew of Gerry Hutch, the armed robber also known as “The Monk”.

Gareth Hutch’s brother Derek is serving lengthy sentences for a variety of crimes including manslaughter linked to a fatal stabbing, armed robbery and a gangland murder attempt.

Cllr Ring said Gareth Hutch had expressed fears for his safety and said the balcony of his first floor apartment in Avondale House was not covered by CCTV.

He was so fearful that his flat number and phone number were connected to the Garda’s Emergency Response Unit (ERU), Cllr Ring said.

Cllr Ring and Gareth Hutch jointly wrote a letter to Dublin City Council requesting that he be moved to a different flat within the apartment complex.

“He was trying to get a decision to move out of the particular flat he was in,” Cllr Ring said. “He felt it was dangerous to him and his son because it was not covered by CCTV.”

Cllr Ring said Gareth Hutch intended to go to the Social Welfare offices in Seán MacDermott Street on Tuesday morning with the letter.

Cllr Ring suggested the man may have been a victim of “guilt by name” as he was a Hutch.

Cllr Ring said he and fellow Independent Cllr Christy Burke had offered to act as mediators in the feud.

Dublin’s north inner-city communities felt helpless to deal with the violence associated with the feud, he said.

“There is a chilling feeling about the place. People are saying to me, ‘would this happen in Foxrock or anywhere else in the city?’ I don’t believe it would.

“We now have a Government and a Minister for Justice. We have no Garda station in the area for four years. The ordinary decent people don’t know what to do.”

One local resident, who did not want to be named, described the victim as a “lovely fellow” who was not mixed up in crime despite his name.

He said Gareth Hutch had worked as a scaffolder and a taxi driver. “He was always jolly. He always had a smile on his face. It is a horrible thing to happen to him.”