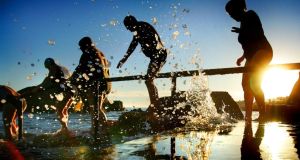 Swimmers ease their way into the icy waters at Forty Foot in Sandycove during the annual Christmas swim. Its insurer is withdrawing its public liability cover. Photograph: Kate Geraghty/The Irish Times

The bathers’ association based at the well-known Forty Foot swimming spot in Dublin is to consider its future after its insurer withdrew its public liability cover.

Members of the Sandycove Bathers’ Association are to vote at an extraordinary general meeting on Thursday on the future of what was until recently a male-only swimming club.

The club’s committee has proposed that it should no longer manage, maintain or repair the Forty Foot, which was Buck Mulligan’s bathing spot in James Joyce’s Ulysses. Maintenance of the area has been central to the association’s role since it was established in the late 1880s.

The vote comes less than a year after women were allowed to be full members of the association. Since March, fewer than a dozen women have actually joined its 180-strong membership, though of 65 non-member contributors, half are women.

In a letter to its members, the association said its insurer, Allianz, had withdrawn its cover.

This followed the settlement of an insurance claim, worth €7,000, taken by a member of the public against it and Dún Laoghaire-Rathdown County Council.

“All advice indicates other insurers would follow suit,” the letter said. “This leaves our committee and members in a potentially vulnerable situation if a future claim is made against us.”

In 2004, a substantial settlement was paid out by insurers to a swimmer who sustained serious injuries after striking a rock while diving at the Forty Foot. The association told members that it could not be sure of the outcome in any future court case, particularly if the court wished to assist an injured plaintiff. It also suggested a change of name to the Forty Foot Bathers’ Association.

In a letter to the council, it said the association would “cease to manage, maintain or repair the said bathing area”, but would “without prejudice” contribute funds for works needed in the area.

In response, the council warned that the Forty Foot would become “a public swimming location” and the collection of funds there by the association “or any emanation or successor” would not be permitted. It would also not be permitted to carry out any works there.

The council advised, to ensure “no residual legal or other ambiguity” remained, the association should “make arrangements to surrender all its existing leases, licences and all or any other residual ancillary interests that it may currently have.”

President of the association, Fred Espey, who has been swimming at the Forty Foot for 70 years, said it would “like the situation to continue as it is, but it is such a litigious culture”.

“If we can protect the members, it would be an ideal situation,” he said. “Sea swimming has exploded in the last five years; it’s where so many people make friends, and we can have up to 90 people at our annual party.”