Kim Kardashian and Kanye West fly into Ireland for honeymoon 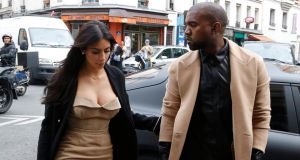 TV personality Kim Kardashian and rapper Kanye West in Paris last week. The newly-weds are to spend a week on honeymoon in Ireland. Photograph: Reuters 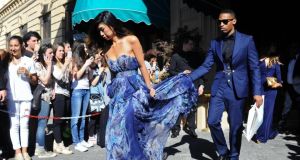 into Ireland today to spend a week honeymooning here following their wedding at a luxury mansion outside Florence yesterday.

The couple arrived at Cork Airport by private jet just before 3pm and were collected in a Mercedes before being driven to an undisclosed destination in Munster after their lavish wedding at Forte di Belvedere in the hills outside Florence.

The exact location where the couple were holidaying remains a tightly guarded secret but many fans travelled from Cork city to the Castlemartyr Resort Hotel in East Cork after it was rumoured they were staying there.

Former US President, Bill Clinton has stayed at the luxury hotel and golf complex set in rolling grasslands between Midleton and Youghal and last year veteran US rocker, Bruce Springsteen stayed there with his band following his sell out show at Pairc Ui Chaoimh.

Contacted by The Irish Times last night as to whether the celebrity couple were staying at the five star resort, the Castlemartyr Hotel Resort declined to comment.

“Unfortunately I can’t comment on that, sir,” said a staff member.