Thousands of participants and supporters to take part over two weekends 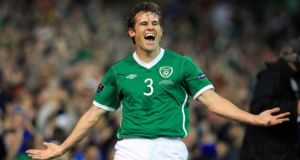 Kevin Kilbane knows all about participation in sport. For a decade and a half he was a fixture on the Irish team, winning 110 caps.

On Friday he opened the HSE Community Games in Athlone and professed a pang of nostalgia as he watched the under-10s indoor football take place between Annaghdown of Galway and St Bridget’s of Kildare in the sports hall which had a raucous and very loud gallery of parents and supporters.

Instantly recognisable to any Irish sporting fan over the age of 10, there were one or two puzzled faces for those under that age who do not remember the stalwart full back who retired from international football in 2011.

Kilbane fulfilled a long standing invitation to come to the Community Games now in its 48th year.

He confessed that it took becoming a father himself to realise that sport was not all about the cut throat world of professional soccer.

Kilbane has two daughters, Elsie and Isla, the oldest of whom, Elsie, has Downs Syndrome. “My own background is all about winning, participation was at the back of my mind,” he said.

“I’ve come full circle. I now understand what participation in sport actually means to all athletes.”

Another Ireland international, this time rugby international Sean O’Brien has also endorsed the Community Games. Ireland’s captain for the game against Scotland was first introdued to the sport when he played for his area Ballon/Rathoe as an eight year old.

In a testimonial he sent to the Community Games, O’Brien spoke of how he made lifelong friends and tried out many sports through it.

The launch was also attended by the Minister for Sport Paschal Donohoe. He said chronic asthma as a child prevented him from participating in sport as a youngster, giving him a keen sense of the importance of such activity.

“It is only since I’ve grown out of my asthma that I have had the kind of sport I like doing which is cycling. That gave me a sense of the huge importance of inclusivity,” he said.

“Children, regardless of their ability, if they have an interest or the attitude, we have to give them the opportunity of being involved in sport.”

The Community Games is the biggest participant sporting event in Ireland every year. Over two weekends, about 7,100 children will compete. Organisers estimate that between competitors, volunteers and supporters, about 20,000 will pass through the gates of Athlone Institute of Technology.

About 8,000 paying adults passed through the turnstiles on the second weekend last year.

“When you come along the road coming into the Institute of Technology and you see all the flags, it brings home to me the breath of support for the Community Games,” Mr Donohoe said.

The main events taking place this weekend will be swimming, rugby, soccer, handwriting and art.

Next weekend is dominated by track and field athletics, basketball, gaelic football, talent and badminton.

There are 400 more participants this year as many events have been added in different categories.