Kerry profile: Dynasties battle it out in council elections 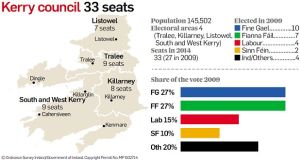 Dynastic politics are a strong feature of the battle for seats on Kerry County Council.

The outcome will inevitably influence the contest for the five Dáil seats in the new Kerry constituency at the next general election.

“Kerry has given birth to a sufficient number of political dynasties to rival any other Irish county and not just since the foundation of the State, but also in parliamentary forums that pre-date Dáil Éireann and independence,” writes Radio Kerry journalist and author Owen O’Shea in his book Heirs to the Kingdom, Kerry’s Political Dynasties.

Names like Healy-Rae, Spring, McEllistrim, Ferris, Foley and Griffin are to be found among the line-up of candidates this time.

A notable absentee is the O’Donoghue name, following the withdrawal from the election of outgoing councillor Paul O’Donoghue, brother of former minister and ceann comhairle John O’Donoghue, who has made no secret of his desire to return to the Dáil.

The absence of an O’Donoghue on the ballot paper ends a 54-year-old tradition, which began when the brothers’ late father Dan was first elected to the council in 1960.

The last election gave Fine Gael, with 10 seats, and Labour with four, a majority and control of the coveted mayoralty. Fianna Fáil, which had a poor local election countrywide, secured seven seats, Sinn Féin won two, while Independents took three and South Kerry Alliance (SKIA) won the final seat. The performance of

SKIA councillor Michael Gleeson in the Killarney electoral area, will bear watching, given he is expected to throw his hat in the ring in the general election.

The political landscape has changed significantly since 2009.

With the abolition of the town councils, Kerry was allocated a new electoral area, the nine-seat South and West Kerry, which takes in Dingle, Killorglin, Caherciveen and Kenmare.

Candidates include outgoing councillor Michael Cahill, who left Fianna Fáil to back another former FF councillor Tom Fleming, who secured a Dáil seat as an Independent at the last election.

Other candidates include outgoing councillors Matt Griffin, brother of Fine Gael TD Brendan Griffin, and Johnny Healy-Rae, whose father Danny Healy-Rae is also a councillor and candidate in the Killarney electoral area.

The line-up in the eight-seat Killarney electoral area includes Fianna Fáil’s Anne McEllistrim, who has moved from the Tralee electoral area to make way for her brother, former TD Tom, who is campaigning to return to the Dáil.

Tralee electoral area candidates include Labour’s Graham Spring, brother of TD Donal Spring, and nephew of former party leader and tánaiste, Dick Spring, and Sinn Féin’s Toireasa Ferris, daughter of TD Martin Ferris, who is expected to be the general election candidate if her father stands down. The Fianna Fáil candidates include outgoing councillor Norma Foley, daughter of the late Denis Foley, who was a member of both the Dáil and Seanad.

Dáil ambitions
Candidates for the seven seats in the Listowel electoral area include outgoing Fianna Fáil councillor John Brassil, known to have Dáil ambitions, and veteran Fianna Fáil activist, Dan Kiely, who served in the Seanad and the council, and is running as an Independent.

The issues are unemployment, ghost estates and housing lists, proposed water charges and problems with supply, wind farms in north Kerry and the turf-cutting controversy in Listowel.

There will be much interest in the performance of Labour and Fianna Fáil in particular. Labour is battling to defy the national swing against the party, while Fianna Fáil is attempting to rebuild a base which will provide a Dáil seat in a county, once a party stronghold, where it has none.