Planning permission sought for building on 2.24 acre site on outskirts of Tralee 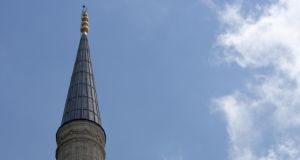 A decision on planning permission for a full mosque in Tralee, Co Kerry has been delayed pending confirmation on whether a call to prayer public address system is to be included in a 23 metre tall minaret attached to the building. Image: Thinkstock.

A decision on planning permission for a mosque in Tralee, Co Kerry has been delayed pending confirmation on whether a call to prayer public address system is to be included in a 23 metre tall minaret attached to the building.

The application, the second in recent years, was lodged with Kerry County Council on behalf of the Kerry Islamic Cultural Centre in April.

The proposal concerns a 2.24 acre site in a business park at Killerisk, on the eastern edge of Tralee. The business park contains an Eircom exchange and is bounded by housing.

The mosque will have an 18 metre high dome, 23.6 metre high minaret ,parapets and an assembly hall. It is primarily designed to act as a prayer centre for the local community, but accommodation for visitors is also proposed.

An earlier application was refused last year primarily on the grounds of traffic concerns. There are few footpaths and the road would need to be realigned if permission is granted.

Since 2006 there have been a number of applications for Islamic prayer centres in the Killerisk area, which is a short distance from Kerry General Hospital, the Manor shopping centre and Kerry County Council.

A full traffic study has been included in the application and it says daily prayers begin at 4.30am and end at 10pm.

Planners are now requesting further information, particularly on the possibility of calling to prayer is to take place from a public address system. The council planners are also informing the applicants they may need written consent from adjoining landowners and householders for the development to go ahead, a planning spokesperson said.

A number of houses are likely to be over-looked by the mosque.

“A decision is on hold pending further information on around nine different areas,” the spokesperson said.

No objections have been received from third parties. However a group calling itself Pegida Ireland which is attached to a German anti-Islamic organisation has begun an online petition against the Tralee mosque, which has been signed by 212 people.

Pegida members campaigned in Tralee at the weekend and handed out leaflets against the mosque and calling on people to preserve their Celtic culture. A spokesman said they planned to start a party called The Celtic People’s Party shortly. Flyers handed out on Saturday called on Kerry people to say no to Islam and no to the mosque. The group denies it is racist.

Kerry has the highest number of Muslims outside of Cork, Dublin and Limerick, and Islam is now Kerry’s third biggest religion. Some 833 Muslims live in Tralee and more than 1,500 in all live in Co Kerry, according to 2011 census figures. However the numbers are believed to have been increased since the census.