June was Dublin’s driest in 40 years 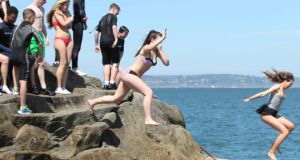 Teenagers jump into the sea at the Forty Foot in Dublin during a spell of good weather in June. Photograph: Stephen Collins/Collins Photos

Dublin had its driest June for 40 years, according to Met Éireann’s latest weather forecast.

The station at the Phoenix Park recorded just 11.5mms of rain during the month or 17 per cent of the monthly average for June making it the driest June since 1975.

However, it was abnormally cold for the month with average temperatures a degree below normal in many places. Parts of the west, northwest and southwest were exceptionally cold with the largest difference of minus 1.4 degrees reported at Markree, Co Sligo (mean temperature of 11.9 degrees).

The majority of the month’s highest maxima were recorded on the final day of June with Dublin (Phoenix Park) reporting the highest temperature of 2015 so far with 25.6 degrees, its highest for June since 1996.

Indications are that the mini heatwave we are having, which included June 30th, is coming to an end.

Friday is likely to be the last day of the exceptionally nice weather with highs of 22 degrees especially in the west and north-west of the country.

Rain will cross the country on Friday night. Saturday will have sunny spells and isolated showers, most of which will occur in the south and west of the country.

Heavy rain is forecast for Sunday. Next week is looking wet with temperatures below normal for the time of year.