Judgment of €2.47m entered against Minister and his wife 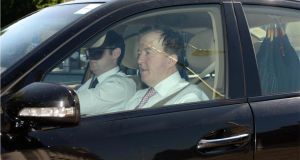 Fine Gael Minister of State John Perry and his wife have consented to judgment for some €2.47 million being entered against them at the Commercial Court over unpaid loans.

Counsel for Mr Perry and his wife Marie told Mr Justice Peter Kelly today, while they would contradict several claims in affidavits of Danske Bank, they accepted they had no bona defence to judgment and were consenting to judgment in the amount of €2,474,346.

The judge entered judgment in that sum and also granted the couple a stay on execution and registration on the judgment until September 2nd.

Counsel for the couple had sought a three-month stay to allow for restructuring proposals to be advanced by them to the bank.

Rossa Fanning, for the bank, opposed a stay of that duration saying there had been ample time for proposals to be advanced.

The judge said he would not grant the three months but would grant a stay to September 2nd. Given the couple’s attitude to the bank’s application, he added he would only award costs at the lowest level against them.

The bank sued the couple, of Carrownanty, Ballymote, Co Sligo, arising from a October 2011 facility for some €2.42 million provided to restructure existing loans.

It claimed the security for the facility included first legal mortgages over a retail premises, the Stone Park Restaurant and Perry’s Hardware, all located at Main Street, Ballymote, and over some 50 acres of agricultural lands at Ballymote.

It claimed the loan was to be repaid in full some 12 months after it was drawn down in November 2011, with the effect the final repayment date was November 19th 2012.

The couple made some repayments but, the bank claims, failed to keep up the level of interim repayments required under the terms of the loan facility.

Last March, it demanded immediate payment of the total sum outstanding, with interest, of about €2.47 million.