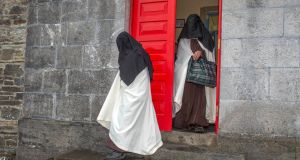 A nun has been given nine months to find a new place to live and worship after a judge accepted she had made a genuine effort to dismantle a hermitage she established without planning permission in Co Cork.

Sr Irene Gibson, a Carmelite nun of the Holy Face of Jesus, was convicted last December at Skibbereen District Court of breaching the Planning and Development Act 2000 by establishing the hermitage at Corrin South, Leap.

Judge James McNulty adjourned penalty until April to allow Sr Irene to find an alternative place for the hermitage she shares with Sr Annemarie Loeman, but the matter was put back due to the Covid-19 pandemic.

Philip O’Sullivan, executive planner with Cork County Council, told the court he visited the site on Monday and the two nuns remained there but had closed off the entrance and reduced the number of structures from seven to four. He said they had removed a building used as an oratory.

Sr Irene said she and Sr Annemarie lived in the 8ftx10ft sheds and used another as a kitchen. They used the container to hold items taken from the dismantled oratory and some personal belongings, she said.

She had said in December that she and Sr Annemarie were planning to move to a house offered to them in Youghal. She said on Tuesday that the owner later contacted them to say it needed to be repaired and the offer never materialised.

Sr Irene said she looked for an alternative property near Leap but could not find something affordable. The nuns were keen to stay near Leap as they attended a Latin or Tridentine Mass nearby every Sunday, which was an important part of their faith.

Given they were not affiliated to the local official Catholic Church, she said they could not turn to a bishop for help finding a place where they could continue their hermit lives of prayer and contemplation.

Sr Irene said they had applied to the council for housing but that certain documents were sought and she was not able to supply these in order to get on the council’s housing list.

Judge McNulty said he accepted that property prices in an area such as west Cork might be higher than Sr Irene and her community could afford and he suggested that she might perhaps consider relocating to another part of the country where property might be more affordable.

Mr O’Sullivan told the court that the council had been contacted by people living close to the unauthorised settlement to make them aware that it had no planning permission and council was obliged to uphold the planning regulations.

Judge McNulty questioned whether the council’s housing department might have a responsibility to the nuns, given its planning section was seeking to have their home removed.

Margaret Noelle O’Sullivan, solicitor for the council, said it had given Sr Irene considerable latitude as the breach of planning was notified to them in 2016, they served an enforcement notice in July 2018 and only brought the matter to court last year.

After viewing photos from the council which showed Sr Irene had reduced the number of structures at the site, Judge McNulty adjourned the matter until June. He said Sr Irene might think about his suggestion of relocating elsewhere where they might be happier.