Joseph Plunkett’s role in Rising remembered by his school 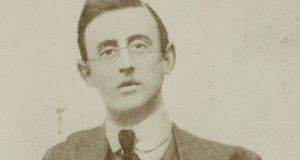 Joseph Mary Plunkett, director of of military operations for the Irish Volunteers during the Easter Rising.

For the last century mystery has surrounded the reason why Joseph Mary Plunkett was appointed director of military operations for the Irish Volunteers during the Easter Rising.

Unlike James Connolly or Michael Mallin, who had both been in the British army, Plunkett had no record of military service.

It was thought Plunkett had learned his military training at Stonyhurst College, the Jesuit boarding school in Lancashire, while serving in the Officers’ Training Corps (OTC).

The suggestion has appeared in many books about the Rising.

The corps was set up in public schools and universities as a training unit for the aspiring officer classes of the British army.

However, Stonyhurst College has no evidence that Plunkett ever served in the corps and, given his delicate health, was unlikely ever to have done so.

Plunkett had glandular tuberculous and suffered from bad health all his life.

His brother George, though, who was also at Stonyhurst at the same time as Joseph Mary, did join the OTC.

George Plunkett fought in the GPO in 1916 and was also sentenced to death. In his case, his sentence was commuted.

Stonyhurst is hosting a series of events to mark the centenary of the Easter Rising, including a lecture Mr Knight has given about Joseph Mary Plunkett’s years in the schools between 1906 and 1908.

“Once this notion has been expressed in print, surmise rapidly turns into established fact and is then widely copied by everyone and so sooner or later it becomes ‘history’, which we all know is not necessarily the truth about the past but merely what has come to be accepted as the truth,” he said.

The events coincide with the said news of the death of Eoghan Plunkett, a son of George.

In an interview with this newspaper last June, Eoghan Plunkett recalled how his father rarely spoke about 1916, while the execution of his uncle Joseph Mary was “not a subject for conversation” in the family.

When asked how the centenary of the Rising should be commemorated, he said the public should remember the honesty of those who fought.

“Most of them were totally honest and decent.”