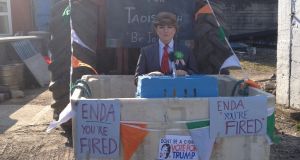 Clare Island may be in Enda Kenny’s constituency, but it was “Trump For Taoiseach” at the annual St Patrick’s Day parade on Thursday afternoon.

For secondary school student Laura McCabe, the process of US electoral primaries is not a priority as she prepares for her Leaving Cert exams, but her big mane of hair perfectly resembled the distinctive coiffure of US presidential hopeful Donald Trump.

Her podium may have been a fish box on the trailer of a tractor, but she smelt more of roses than anything murky as the convoy of floats convened at the community centre.

Her older brother Ian, who recently completed a PhD in science and just moved home from the US with his young family, transformed the family truck into the Clare Island Nasa Space Programme.

Rumour has it that he and his two sons, Tadhg (6) and Oscar (3), are planning to work on a programme to propel the Taoiseach and some of his Ministers to Mars.

Political themes pervaded, as tractors and trailers were transformed into overcrowded A&E wards, the GPO in 1916, and a teetering canoe in which a Joan Burton lookalike (aka islander Jane O’Malley) perched precariously as she went along the winding road to the Cistercian Abbey.

The latter was in reference to Joan’s fall from a canoe in Thomastown during flooding at the end of December.

The parade had traditionally been led by octogenarian Paddy Flynn’s jennet, which had hauled a specially built carriage for Saint Patrick. The passing of the noted jennet, however, meant that this year Austy Burns led proceedings on his decorated quad.

Co-founder of the annual event, Jane O’Toole, said the parade “means so much to the community”.

“After the long winter, this is such a social event for young and old. All the participants come up with such great political ideas. Then, of course, we have an evening of ceol agus craic afterwards,” she said.

“It is always a great community effort by the young and old where the islanders’ natural creativity is used to a great advantage,” Wettergren said.