It’s scary the lengths people go to for Halloween

Each Halloween Dublin Fire Brigade attends hundreds of fires. During the build up turf wars between youths break out as rival groups battle to collect pallets of wood and tyres for bonfires. Video: Enda O'Dowd 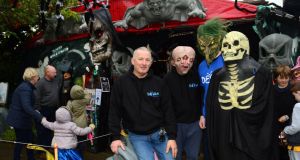 A hazardous spill site peopled by zombies, a haunted cemetery and the aftermath of a murder are all scenes that have been staged in Kate Kelly’s front garden in Portmarnock, Co Dublin, at Halloween.

From the start of October, Ms Kelly, who is originally from Chicago, gets eager inquiries about what she’s “doing this year” and an ever-expanding army of young admirers eagerly watch the preparations.

It’s a far cry from bobbing for apples and throwing a sheet over your head to go trick or treating, but Ms Kelly believes Ireland is fast catching up with the US in celebrating Halloween.

“I moved to Ireland in 2002, but I think Halloween has really exploded here now. You can see it in the shops, in the decorations people have.

“It’s contagious because it’s easy to participate in, it’s fun and it doesn’t have to cost a lot of money.”

“Halloween has changed so much since I was growing up in the 1970s and 1980s. Back then you used whatever your mother had to hand as a costume, you got a handful of monkey nuts and an apple and you played a few games.

“Now we decorate our houses for two weeks prior to the main event, and on the night some people really go all out.

“I love it, it brings out the kid in me. I love the dressing up, and the buzz on the night. The kids really get into it, and the scarier the costume the better.”

Ken Carraher, an electrician from Killiney, Co Dublin, doesn’t do Halloween by halves. For the past 16 years, to raise money for charity, he has created a Halloween crypt in his garden packed with giant gargoyles, witches, skulls and goblins complete with spooky lights and sound effects.

“We started off with two mannequins 16 years ago and now we’ve a few thousand props.”

There is no charge, but they can make a donation to Debra Ireland by putting money in two coffins set up for the purpose.

Mr Carraher has raised more than €25,000 for various charities since he started his Halloween crypt, but for the past six years has raised funds for Debra Ireland, which helps children with the chronic skin disease epidermolysis bullosa.

“Halloween has certainly got bigger here. Now there’s stuff in Irish shops that I’d buy. Before that I’d be going to the US and places like that trying to find good stuff.”

So what has made Halloween into the big deal it is today?

Anne Holohan, assistant professor at the department of sociology at Trinity College Dublin, thinks it showcases the globalisation of culture: Irish people are adding to what was originally an Irish festival by incorporating the ways in which it is celebrated in other countries.

“Rather than seeing cultural diffusion as being US versus everywhere else, we’re seeing more and more in recent years that local culture, for example Ireland in this case, being the origin of the festival Halloween.

“That culture is diffused elsewhere and then the culture of origin incorporates parts of those new practices.

“Then a hybrid form of the cultural practice emerges,” she says.

“Globalisation also means we are more aware of similar festivals elsewhere – Mexico’s Day of the Dead being the relevant example here – and we take inspiration from that in celebrating our own Halloween.

“The origins of these festivals are similar – fear yet recognition of death and the supernatural – and it’s comforting and fun to share the best bits.”

And growth of Halloween is also being felt by retailers.

TheCostumeShop.ie is an Irish website that sells a range of adult and children’s Halloween costumes, decorations and face paint. It’s having its busiest year ever.

A spokeswoman for Lidl said sales of Halloween costumes and decorations were up on previous years.

The run up to the big night is also a busy time for branches of the Art and Hobby Shop, where face paints are extremely popular.

So all that remains to be done is get into the costume, out-do the neighbours with the decorations and pay some heed to those who try to keep everyone safe.

Cocooning Q&A: How does it work? Who must do it? Can people visit my home? 16:58
Coronavirus: Managing the surge in cases is a day-to-day battle 16:48
Man (30s) assaulted by group at supermarket in North Co Dublin 16:40
Irish flight bringing PPE from China arrives in Dublin 16:37
Coronavirus: ‘Last time I saw her was when she was put into the ambulance’ 16:34