‘It’s not getting fixed’: Luas passengers put out by stoppages 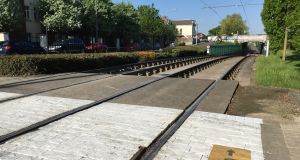 A steady flow of would-be passengers arrived at the Rialto Luas stop on Friday morning only to walk away grumbling when they realised the service had been disrupted yet again.

Medical students Louise Ward and Ralph Hurley O’Dwyer were on their way out to Tallaght hospital for lectures when they spotted the notice saying the Luas would not operate on Friday because of the ongoing industrial dispute at the company.

“It’s inconvenienving an awful lot of people.I wasn’t even aware there was a strike on today. There have been so many. At the start you were checking the dates but at this stage you’re unsure when there is a strike going on,” said Ms Ward.

“I don’t think the strikes are making people have any more sympathy for the drivers,” added Mr O’Dwyer. “I think everybody should have a fair wage but I don’t think strikes are the best way of going about it at all.”

A further two strikes are due to take place this month on May 20th and 27th with four-hour stoppages planned for May 26 as well as six dates in June.

DIT law student Jack Creigh said the stoppages will affect third level students trying to get to exams. “It’s just annoying because I think they’re on strike again next Friday and I have an exam so I need to find out a route,” he said. “I feel like they could have done it on a weekend. The majority of colleges have exams this time of year so could they not put it off at least until the summer.”

Mr Creigh cut a lonely figure as he walked along the red line on his way into Aungier Street in Dublin city centre. “I’m not from Dublin. I’m staying in my parents’ friends’ house near Drimmnagh and I don’t really know the bus routes,” he said.

On Thursday the drivers announced that they would alter their planned work stoppages so as not to disrupt Leaving Certificate students travelling to exam centres.

Local People Before Profit TD Bríd Smith, who supports the workers, said this was a good gesture, adding that she believed the public is beginning to have more sympathy for the drivers.

A local woman in Rialto called Mary said it was “no harm for workers to get their rights”. She was on her way to get the number 123 bus into the city centre. “I use the Luas nearly every day. I’d be a Luas user four to ficve times a week. It is very handy to me. I enjoy getting the Luas,” she said.

“In fairness to the workers I hope they get what they want,” she added. “But it’s not getting fixed. There has to be something drastically wrong. The company must be losing a hell of a lot of money.”